India vs South Africa T20Is: 5 players to watch out for

India are brimming with confidence after they dominated West Indies in all the three formats of the game, with only rain denying the clean sweep of the Test, ODI and T20I series. 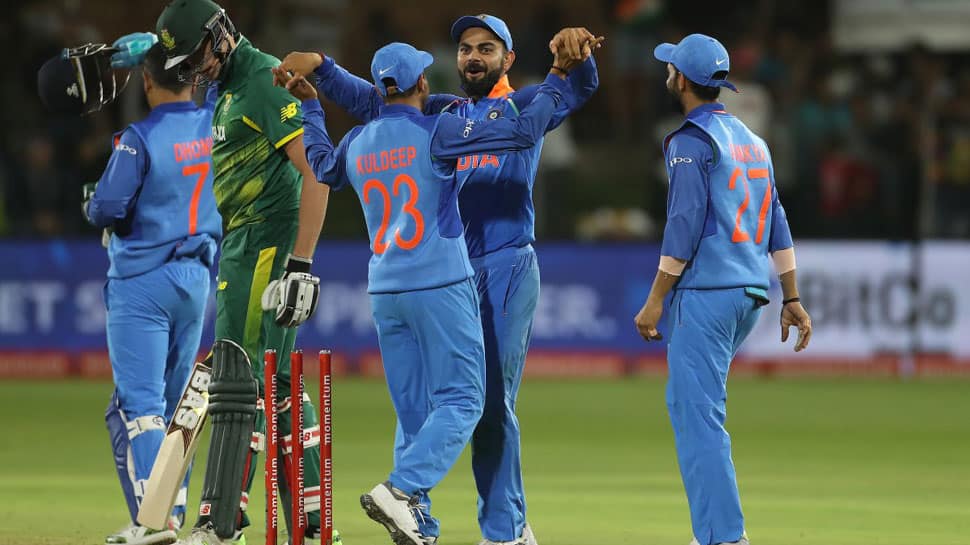 After a successful tour to the West Indies, Virat Kohli-led India will look to continue their winning momentum when they head into the three-match T20I series against South Africa, beginning Sunday at Himachal Pradesh Cricket Association Stadium in Dharamsala.

India are brimming with confidence after they dominated West Indies in all the three formats of the game, with only rain denying the clean sweep of the Test, ODI and T20I series.

For the hosts, all-rounder Hardik Pandya--who was rested for the tour to the Caribbeans-- has been recalled in the national squad for the three T20Is against South Africa.

South Africa, on the other hand, have brought in three new faces in the form of Temba Bavuma, Bjorn Fortuin and Anrich Nortje. Quinton de Kock will lead the Proteas side as South Africa look to shrugg off their dismal performance at the 2019 International Cricket Council (ICC) World Cup.

Let us have a look at some of the players to watch out for:

Arguably one of the best batsman in the world, Indian skipper Virat Kohli showcased a decent performance during the recent limited-overs fixtures against the West Indies.

The 30-year-old swashbuckling batsman, who averaged 35.33 against the Caribbean side and also notched up a fifty in a three-match T20I series, will look to come up with a better performance and begin the home season in style when he heads into the T20I series against South Africa.

Kohli has a huge responsibility on his shoulders with ICC World T20 a year away. However, the Indian skipper doesn't have a great record against South Africa in the shortest format of the game as he managed just 173 runs in the last eight matches between the two sides.

All-rounder Hardik Pandya, who has been recalled in the 15-member national squad, will definitely be one of the players to watch out for in the India vs South Africa T20I series.

Pandya has made a big impact in international cricket with his exploits in the ODI and Test format, but his career in T20I has been less impressive in comparison.

However, Pandya shone with both bat and ball in the 2019 edition of the Indian Premier League (IPL), amassing 402 runs besides also bagging 14 wickets. He will look to replicate a similar performance heading into the South Africa T20Is.

Left-handed batsman Quinton de Kock is all set to lead the 14-member South African T20I squad against India. Heading into the opening clash, de Kock will be keen to give his side a good start while batting at the top of the order.

Though de Kock has played just one T20I against India, he was on fire for Team Mumbai in the 2019 IPL. The South African batman finished as a leading run-scorer for the franchise after amassing a total of 529 runs.

Indian opener Rohit Sharma, who has been in teriffic form in the white-ball cricket over the last one year, will look to continue his destructive prowess at the top of the order heading into the upcoming series.

Popularly known as 'Hitman' of cricket for his attacking nature of play, Sharma finished as the highest run-scorer in the 2019 ICC World Cup.

However, Sharma didn't have a great tour of the West Indies, but he would bee keen to shrugg off the same and make significant contributions for the Men in Blue against South Africa.

Kagiso Rabada, who has proved his mettle in all the three formats of the game, will be another important South African player to watch out for in the India series.

Considered as one of the best fast bowlers in international cricket, Rabada had a fabulous 2019 IPL season as he bagged 25 wickets in just 12 matches to finish as the second-highest wicket-taker of the tournament.

However, Rabada had a disappointing campaign at the 2019 ICC World Cup. He managed to claim just 11 wickets in nine matches he played for South Africa in the prestigious tournament.

The two are squads as follows: