Indian batsman and wicketkeeper Rishabh Pant, who has been at a receiving end of flak from veteran cricketer MS Dhoni's fans over his poor performance, seemed to have redeemed himself on Sunday when he played an outstanding knock in the first ODI against West Indies in Chennai. 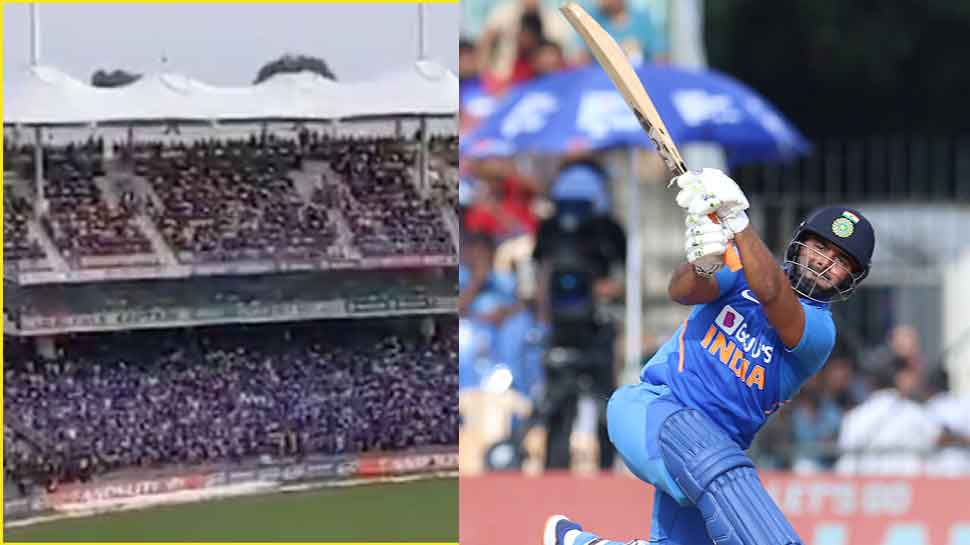 Indian batsman and wicketkeeper Rishabh Pant, who has been at a receiving end of flak from veteran cricketer MS Dhoni's fans over his poor performance, seemed to have redeemed himself on Sunday when he played an outstanding knock in the first ODI against West Indies in Chennai.

India got off to a very patchy start after losing their top order Rohit Sharma(36), KL Rahul(6) and Virat Kohli(4) early on in the innings. All thanks to some brilliant batting from Rishabh Pant and Shreyas Iyer that the 'Men In Blue' managed to grab hold of the match.

Pant played a flying knock of 71 runs off 69 balls laced with seven fours and a solitary six. He notched up his maiden ODI half-century enroute to his knock and appeared to have silenced some of his critics. The fans at the MA Chidambaram stadium in Chennai validated Pant's brilliant performance when the elated crowd chanted his name thunderously at MS Dhoni's den.

Finally Everyone is shouting Rishabh Pant instead of Dhoni. #KnowledgeableChennaiCrowd pic.twitter.com/mCHLrQzotB

The MA Chidambaram Stadium is the official home ground of MS Dhoni's Indian Premier League (IPL) side Chennai Super Kings (CSK) so fans cheering on Pant definitely shows a change in the air for the young player.

There have been many instances so far in 2019 where Pant has been mocked by the home crowd with chants of Dhoni on his mistakes behind the wickets.

Earlier, India captain Virat Kohli had defended Pant and said it was disrespectful for fans to chant MS Dhoni's name from the stands, in case Pant misses an opportunity while urging the fans to be kind to the young wicketkeeper while expressing belief in his capabilities.

"We certainly believe in Rishabh's ability. But I think it's a collective responsibility of everyone around as well to give that player some space to do well. If he misses a chance, people can't shout MS' (Dhoni) name in the stadium as well. It's not respectful because no player would like that to happen. You are playing in your own country and you should get support rather than always thinking what mistake this guy is gonna make. No one wants to be in that position, " said Kohli while coming out in support of Pant, who has received backlash from the ardent fans of cricket over his poor form in the recent matches.

Pant has been out of form behind the wickets since veteran stumper MS Dhoni took a sabbatical from the game after the World Cup, however, the Delhi batsman on Sunday effectively shut down trolls with his 71-run knock.

Shai Hope and Shimron Hetmyer guided West Indies to a comfortable eight-wicket win over India in the first ODI at the MA Chidambaram Stadium on Sunday. With this win, the Carribean side have a 1-0 lead in the three-match ODI series.

I have never seen this: Virat Kohli on Ravindra Jadeja run-out call