The New Zealand women's team defeated India by 23 runs to take a 1-0 lead in the three-match T20I series. 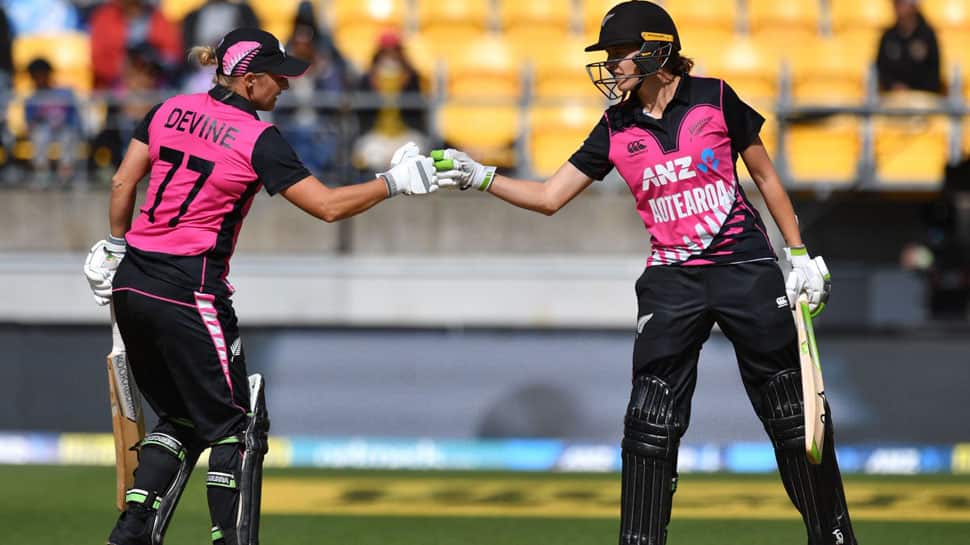 The New Zealand women's team defeated India by 23 runs to take a 1-0 lead in the three-match T20I series.

The hosts posted a total of 159 runs for the loss of four wickets after being sent in to bat first by Indian skipper Harmanpreet Kaur. Opener Sophie Devine was the top-scorer, scoring 62 runs off 48 deliveries in an innings comprising of six boundaries and two sixes.

However, the visitors failed to chase down the total despite a record-smashing half century by opener Smriti Mandhana who scored a half century off 24 deliveries.

New Zealand pacer Lea Tahuhu played a decisive role with three wickets off four overs to derail India's pursuit which was going smoothly till the time Mandhana was at the crease. India were eventually bowled out for 136 runs in 19.1 overs. (With PTI inputs)

# Wicket! India have been bowled out for 136 as Deepti Sharma attempts a shot, failing to direct the ball effectively, resulting in a catch to New Zealand captain Amy Satterthwaite. India 136/10 (19.1 overs)

# Wicket! Two wickets in the over as Radha Yadav is stumped by wicket-keeper Katey Martin, leaving the hosts in need of just one more wicket for victory. India 136/9 (18.6 overs)

# Deepti Sharma is the next batswoman in!

# Wicket! India continue to lose wickets at regular intervals, as Arundhati Reddy is dismissed for just 2 runs off 6 deliveries after being adjudged lbw! India 117/6 (16.3 overs)

# Arundhati Reddy is the next batswoman in!

# Wicket! Anuja Patil has been dismissed for a duck, as the move to promote her up the order fails to yield results. India 111/5 (14.4 overs)

# Anuja Patil has been promoted up the order!

# Wicket! Hemalatha attempts to go for a big hit, in order to negotiate the increasing run-rate but fails to generate nothing but a catch to Amelia Kerr. India 111/4 (14.1 overs)

# Skipper Harmanpreet Kaur walks down to the crease!

# Dayalan Hemalatha is the new batswoman in!

# Rosemary Mair has been brought into the attack!

# India are currently scoring at a run rate of nearly 10 runs per over, having scored 87 runs in nine overs!

# Half-century for Smriti Mandhana who brings up the milestone in just 24 deliveries!

# Jemimah Rodrigues continues to attack from the other end, smashing three consecutive boundaries as India score 58 runs in 6 overs at a run rate of nearly 10. India 58/1 (6 overs)

# Mandhana continues to score runs at will against the hosts, scoring 18 runs off the fifth over bowled by Rosemary Mair, reaching a score of 31 runs off 13 deliveries. India 46/1 (5 overs)

# Smriti Mandhana who has been in great form recently, smashes two boundaries off the fourth over bowled by Lee Tahuhu as India reach 28/1 after 4 overs!

# Spinner Leigh Kasperek is set to bowl the third over!

# Pace-bowler Lea Tahuhu has been brought into the attack!

# Wicket! Priya Punia attempts to smash another boundary having scored one off the second delivery, but fails to generate proper contact handing a catch. India 4/1 (0.5 overs)

# Indian openers Smriti Mandhana and Priya Punia are set to kick off the chase!

# Deepti Sharma was the most economical bowler for India, conceding 19 runs while picking a wicket during her four over spell!

# Wicket! Satterwaite departs for 33 as Deepti Sharma strikes again, drawing the batswoman into going for a big hit, resulting in a catch to Rodrigues. New Zealand 121/4 (16.3 overs)

# Katey Martin is the next player on the crease!

# Wicket! Sophie Devine has been dismissed for 62, after handing a catch to Deepti Sharma off a slow delivery by Arundhati Reddy. New Zealand 116/3 (15.3 overs)

# Opener Sophie Devine is the key batswoman for the hosts at this stage, having scored a half century with Satterwaite scoring a brisk 30. New Zealand 108/2 (15 overs)

# 14 runs from the over bowled by Poonam Yadav as New Zealand reach 78 runs for the loss of two wickets after 11 overs!

# New Zealand are currently scoring at around 6 runs per over with opener Sophie Devine and Amy Satterthwaite at the crease. Radha Yadav and Poonam Yadav have been the wicket takers for India. New Zealand 64/2 (10 overs)

# Amy Satterthwaite has made her way down to the crease!

# Wicket! New Zealand No 3 batsman Caitlin Gurrey has been dismissed for 15 as the hosts reach a total of 47 runs for the loss of two wickets after seven overs. New Zealand 47/2 (7 overs)

# Anuja Patil brought into the attack!

# The hosts are off to a good start in the first five overs despite an early wicket, scoring at a brisk run rate of around 7 runs per over. New Zealand 34/1 (5 overs)

# Caitlin Gurrey comes down at the No 3 spot!

# Arundhati Reddy will open the bowling for India!

# The openers have walked down to the middle with the game set to kick off in a few minutes!

# Both the sides are ready for the national anthems!

# Rosemary Mair and Katie Gurrey are set to make their T20 debuts for the hosts!

# Mithali Raj is not a part of the playing eleven with Priya Punia handed her debut!

It is time for the first T20I and Priya Punia makes her India debut. @ImHarmanpreet wins the toss and opts to bowl first #NZvIND pic.twitter.com/c4368AvRPu

# Harmanpreet Kaur has won the toss and opted to bowl!

TOSS NEWS! INDIA have won it and will be having a bowl first. Time to put the pads on  #NZvIND pic.twitter.com/cqWhEtU9S2

# The New Zealand women's team will look to register a strong start in the opening T20 at Wellington, after a 2-1 loss in the three match ODI series!

Let the prep begin! Just over an hour until our T20 series vs @BCCIWomen gets underway at @WestpacStadium  Come watch us Wellington! #NZvIND #cricketnation #culturescombined pic.twitter.com/233DZVr9cZ

# The Indian women's cricket team will aim for a solid show in the opening encounter of the three-match T20I series against New Zealand.

The three-match series, which was part of the Women's ODI Championship, was won by India 2-1 but they suffered an eight-wicket loss at Hamilton on February 1 after being bowled out for 149.

Surprisingly, the Indian batters struggled most against spinners in the third ODI and that is one area they would be looking to improve.

Harmanpreet Kaur will lead the T20I side. It will be India's first game in the format ever since the infamous loss to England at the World T20 in the Caribbean, where Mithali was dropped for the all-important semifinal.

Questions were raised over Mithali's strike-rate in the shortest format and it remains to be seen how she approaches the series.

Harmanpreet is expected to play a much bigger role with the bat and a lot will depend on the start provided by Smriti Mandhana and Jemimah Rodrigues, who were not amongst the runs at Hamilton.

Mandhana, however, had a memorable ODI series with scores of 90 and 105, enough to earn her the player of the series award.

The three-games will also help the team management assess where it stands ahead of the T20 World Cup in Australia early next year.