New Zealand women recorded a four-wicket win in the second T20I of the three-match series against India, after being handed a target of 136 runs to chase down. 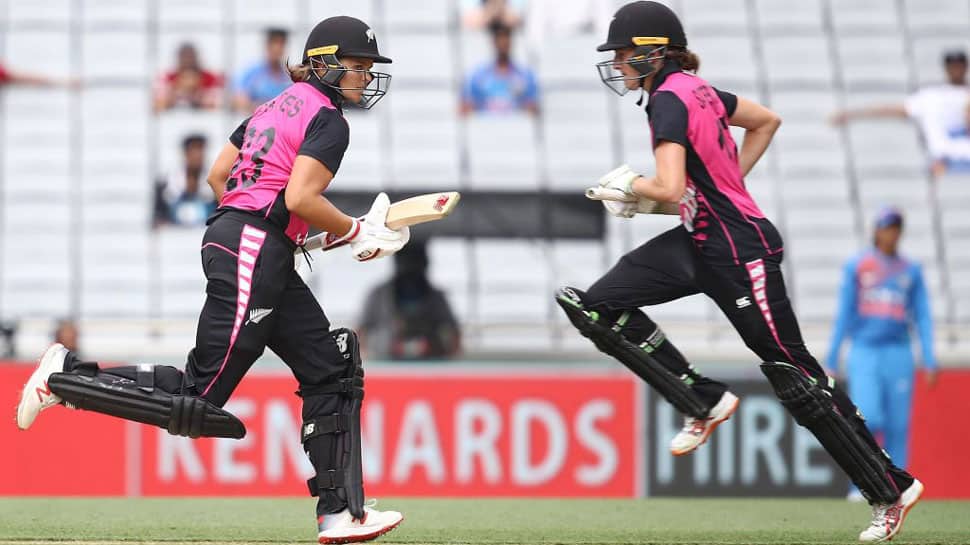 New Zealand women recorded a four-wicket win in the second T20I of the three-match series against India, after being handed a target of 136 runs to chase down.

Opener Suzie Bates scored 62 runs off 52 deliveries in an innings comprising of five boundaries, setting the stage for a win. However, the visitors picked wickets at regular intervals in the death overs to tilt the balance of the game, in their favour.

New Zealand managed to reach the target off the last ball of the game.The third and final match of the series is to be played on Sunday in Hamilton.

# New Zealand win by four wickets, following a single off the final delivery to backward point!

# 1 run needed off the final delivery!

#Wicket! Mansi Joshi who has been handed the last over dismisses Katey Martin off the second delivery of the over, with 5 runs needed off 4 deliveries!

# 2 wickets in the over as Arundhati Reddy accounts for the key wickets of Anna Peterson and Sophie Bates.

# Katey Martin, the wicket-keeper batswoman is the next player in!

# Arundhati Reddy who has conceded 7 runs off her 2 overs so far, is back into the attack!

# Radha Yadav brought back into the attack, with 8 runs off the over as Bates nears her half-century. New Zealand 88/2 (13 overs)

# 10 runs off the over, following a boundary off the opening delivery by New Zealand skipper Amy Satterthwaite. New Zealand 80/2 (12 overs)

# Mansi Joshi, who has been a bit expensive during her spell so far, is brought back into the attack!

# 4 runs from the over as the batswomen struggle to score runs freely off the slow, turning deliveries. New Zealand 62/2 (10 overs)

# Deepti Sharma is back into the attack!

# 11 runs off the opening over of Yadav's spell, as Poonia concedes a boundary off the last delivery following a sloppy fielding effort. New Zealand 58/2 (9 overs)

# Right-arm spinner Poonam Yadav has been introduced into the attack!

# 6 runs off the 8th over bowled by Arundhati Reddy, who has conceded just 7 runs off her two overs so far. New Zealand 47/2 (8 overs)

# Skipper Amy Satterthwaite walks down to the crease!

# Wicket! Radha Yadav strikes for India, deceiving Caitlin Gurrey who was struggling to score freely with a fast delivery, resulting in a catch to Deepti Sharma. New Zealand 40/2 (6.5 overs)

# Caitlin Gurrey is the next batswoman to the crease!

# Wicket! Devine dismissed for 19 runs off 16 deliveries, following an inside edge which goes on to hit the stumps. New Zealand 33/1 (4.4 overs)

# 8 runs off the second over bowled by Mansi Joshi, following a boundary off the first delivery. New Zealand 29/0 (4 overs)

# 8 runs off the first over bowled by spinner Deepti Sharma, as Devine scores the first boundary of the New Zealand chase. New Zealand 8/0 (1 over)

# Mansi Joshi is the next batswoman in!

# Three-consecutive boundaries off the 19th over bowled by Amelia Kerr, with Jemimah Rodrigues dismissed. India 130/5 (19 overs)

# Wicket! Jemimah Rodrigues stumped by wicketkeeper Katey Martin for 72 runs, while going for a big shot having smashed three consecutive boundaries off the over already. India 129/5 (18.5 overs)

# Arundhati Reddy walks down to the crease!

# Wicket! Deepti Sharma dismissed in search of a quick single, as a direct hit from wicket-keeper Katey Martin catches her well short of the crease. India 101/4 (15.3 overs)

# Jemimah Rodrigues inches closer to a half-century, as India reach 99/3, with seven runs off the over bowled by Anna Peterson.  India 92/3 (15 overs)

# Deepti Sharma walks down to the crease, as Dayalan Hemalatha walks off the field following a shoulder injury after attempting a dive!

# Lee Tahuhu concedes three runs off the 12th over as the run-rate reduces down to nearly 7 runs per over. India 82/3 (12 overs)

# Dayalan Hemalatha is the next player in!

# Four runs off the 10th over bowled by Rosemary Mair, as India lose the key wicket of Smriti Mandhana. India 72/2 (10 overs)

# Harmanpreet Kaur is the new batswoman in!

# Amelia Kerr continues to bowl for New Zealand, conceding five runs off her second over as Mandhana nearly loses her wicket in search of quick runs off the last delivery. India 68/1 (9 overs)

# Leigh Kasperek, right-arm off break, comes into the attack with India scoring 7 runs off her first over. India 63/1 (8 overs)

# Amelia Kerr, right-arm leg break bowler comes into the attack with four runs conceded off the over. India 56/1 (7 overs)

# Sophie Devine bowls an economical over, conceding just six runs off the sixth over, despite a boundary off the first delivery. India 52/1 (6 overs)

# India continue to score runs at a consistent rate, with 13 runs scored off the fifth over bowled by Peterson. India 46/1 (5 overs)

# 16 runs off the fourth over bowled by Lee Tahuhu, comprising of two boundaries and a six as India reach 33/1 (4 overs)

# 10 runs off the third over bowled by Sophie Devine following a six off the last delivery by Jemimah Rodrigues, despite the dismissal of opener Priya Punia. India 17/1 (3 overs)

# Wicket! Priya Punia dismissed for four runs off 10 deliveries by fast-bowler Sophie Devine, after attempting to smash the ball in searching of quick runs but failing to land anything but a catch to Amy Satterthwaite. India 8/1 (2.2 overs)

# Right-arm fast medium bowler Lee Tahuhu concedes five runs off her over, with the last delivery nearly resulting in the dismissal of Mandhana. India 7/0 (2 overs)

# 2 runs from the first over bowled by Anna Peterson with Punia off the mark! India 2/0 (1 over)

# The Indian openers Smriti Mandhana and Priya Punia have walked down to the crease with the match set to kick off soon!

# The two sides have walked down to the ground for the national anthems!

# Harmanpreet Kaur is the only Indian to score a T20I century, and will be looking to make her presence felt in a must-win clash!

# Indian batswoman Jemimah Rodrigues has scored 500 runs in T20 Internationals at a strike rate of 128!

# New Zealand opener Sophie Devine has scored the fastest half-century in T20Is and is also the highest wicket-taker for the hosts with 77 wickets!

# New Zealand skipper Amy Satterthwaite has won the toss and opted to bowl first against India!

# Poonam Yadav is India's highest wicket-taker in T20Is with 70 wickets!

Mithali Raj's inclusion could be the bone of contention for the Indian women's team, which will be eyeing a much improved showing with the bat when they face an upbeat New Zealand in a must-win second T20 International on Friday.

The Indian batting is prone to collapses, especially from a position of strength. Chasing 160, India were going strong at 102 for 1 but Smriti Mandhana and Jemimah Rodrigues's dismissal proved fatal for the visitors who collapsed to 136 all out.

Mithali was not picked as the team management is looking to build a squad for the 2020 T20 World Cup in which the senior player is unlikely to feature. However, youngsters like Priya Punia and Dayalan Hemalatha did not deliver, and she could be back for the second game considering that the series is on the line.

New Zealand on the other hand, are riding high on momentum, having beaten India comprehensively in the previous two contests, the final ODI and the first T20.

The visitors will have to be wary of pacer Lea Tahuhu, who struck thrice in Wellington and was named player of the match despite opener Sophie Devine's 48-ball 62.

Ajinkya Rahane to lead Rest of India against Ranji champions Vidarbha, KL Rahul to lead India A vs England Lions