Indian field coach R. Sridhar has joined the bandwagon of sports personalities who are doing their bits in contributing towards the country's fight against the novel coronavirus (COVID-19). 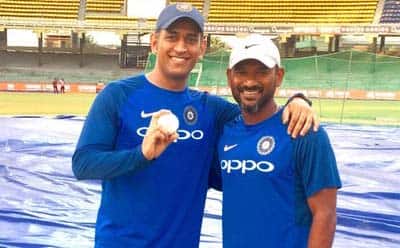 Indian fielding coach R. Sridhar has joined the bandwagon of sports personalities who are doing their bits in contributing towards the country's fight against the novel coronavirus (COVID-19).

Taking to his official Twitter handle, the 49-year-old former Indian first-class cricketer said that he has decided to contribute Rs 4 lakh towards coronavirus relief fund.

Sridhar has opted to contribute Rs 2 lakh to Prime Minister Narendra Modi's CAREs Fund, while he would donate Rs 1.5 lakh to Telangana Chief Minister's Relief Fund and Rs 50,000 to Secunderabad Cantonment Board.

"As a proud Indian citizen, I'm Duty-bound and honoured to contribute Rs 200,000/- to @PMCares, Rs 150,000/- to @TelanganaCMO & Rs 50,000/- to Sec Cantt Board. #COVID19outbreak #PMCaresFunds #PMCARES @narendramodi @PMOIndia @KTRTRS @BCCI @WHO #letsgetourcountrybackontrack," he wrote.

The 38-year-old tweeted that he had decided to donate his two year's salary to Prime Minister's relief fund. In March, Gambhir had released Rs 1 crore out of his MP Local Area Development Scheme (MPLADS) to fight COVID-19 besides donating his one month's salary to the Central Relief Fund.

Meanwhile, young shooter Apurvi Chandela had pledged to contibute Rs 5 lakh towards the country's efforts to battle the threat of COVID-19.

Earlier, the Board of Control for Cricket Council in India (BCCI) declared that they would contribute Rs 51 crores to the Prime Minister's Citizen Assistance and Relief in Emergency Situations Fund.

The virus outbreak, which was first reported in China's Wuhan in December 2019, has so far affected more than 9,30,000 people and claimed lives of 47,200 persons globally. In India, the number of confirmed COVID-19 cases has crossed 2,000 on Thursday (April 2, 2020) while the death toll due to the deadly virus has touched 53.