With this huge win, SRH finished the IPL 2020 league stage at the third position on the points table - thus securing the final Playoffs berth and knocking KKR out of the tournament. 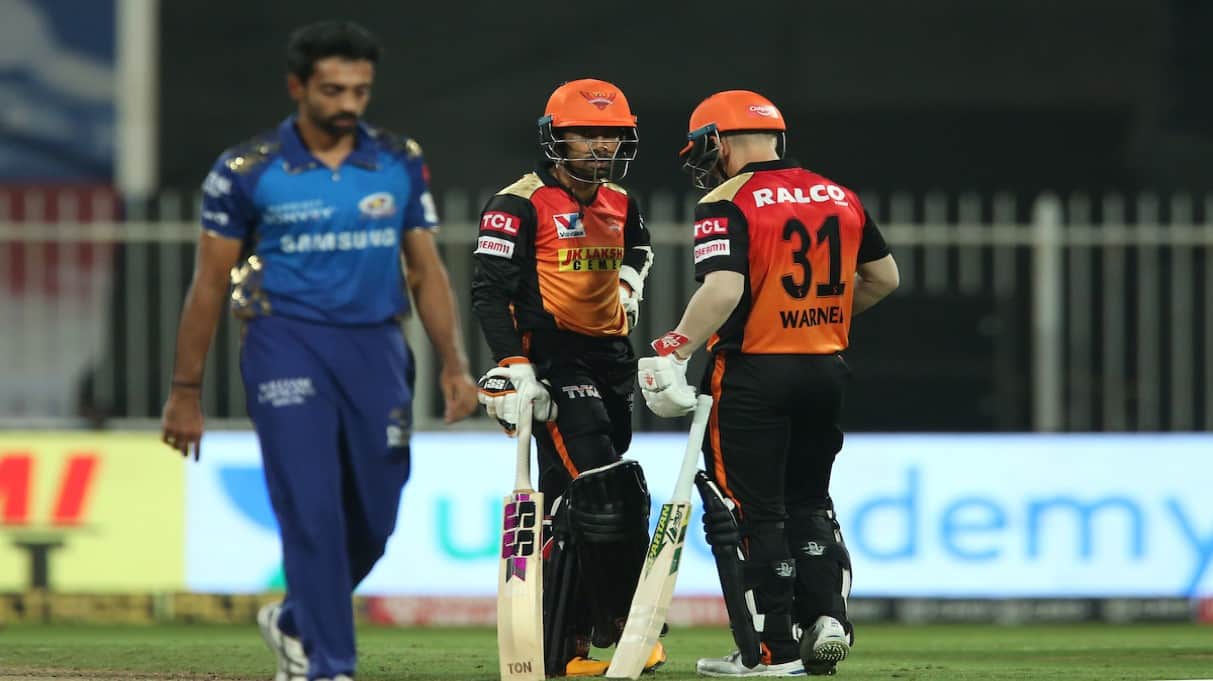 SunRisers Hyderabad ensured their entry into the IPL 2020 Playoffs in style as they brushed aside Mumbai Indians by 10 wickets at the Sharjah Cricket Stadium on Tuesday (November 3) in the final league game of this season.

SunRisers, thus, secured the remaining berth in this year’s Playoffs which meant that Kolkata Knight Riders were knocked out of the competition. SRH went ahead because of their better net run-rate – finishing the league stage at third position on the points table, even leap-frogging RCB.

The duo looked in imperious touch and left no margins for error. They took the match by the scruff of the neck – both completing their half-centuries. It seemed like a race between Warner and Saha at first as to who betters the other but Saha showcased his maturity, giving more of the strike to his skipper - who was timing the ball just a tad bit better.

Warner just took off after completing his 48th IPL half-century and finished at 85* (off 58 balls; 4x10, 6x1). His three consecutive  fours against fellow Aussie James Pattinson were perhaps, the highlight of the day.

Saha acted as his able deputy, finishing at 58 (off 45 ball; 4x7, 6x1). It must be noted that this was the keeper-batsman’s second fifty after just having played three matches in this edition. In his three games of IPL 2020, Saha has scored 87, 39 and 58* respectively – a big reason for SRH’s phenomenal turnaround this year.

No Mumbai Indians’ bowler had any answer on the day and it was clearly evident as to how important the duo of Trent Boult and Jasprit Bumrah is to their fortunes. Bumrah, Boult and Hardik Pandya had all been rested for this game and it all showed in their dismal performance on the day.

Earlier, Warner had won the toss and put Mumbai Into bat. Mumbai were boosted by the return of their regular skipper Rohit Sharma, who caught everyone by surprise by walking out for the toss.

Sandeep Sharma provided the opening breakthrough, removing Rohit early who miscued a knuckle ball. In Sandeep’s next over, Quinton de Kock hit two sixes and a four of the opening three balls but the pacer had the last laugh as he bowled the South African on the fourth ball.

The in-form pair of Suryakumar Yadav and Ishan Kishan then joined forces and threatened to take the game away but it was Shahbaz Nadeem who was the trump card on the day. In the 12th over, Nadeem first dismissed Suryakumar -getting him stumped out and then followed it up by outfoxing Krunal Pandya just three balls later and Kane Williamson did the rest.

Mumbai never recovered from this double blow and Sandeep Sharma, in his second spell, removed Kishan for 33 – his third wicket. Sandeep finished with figures of 4-0-34-3.

With Mumbai ambling along at pedestrian pace, managing just 119/7 after 18 overs, Kieron Pollard hit Natarajan for three consecutive sixes in the penultimate over of their innings before hitting another huge one in the final over bowled by Jason Holder.

Pollard made 41 (off 25 balls; 4x2, 6x4) and was finally dismissed by Holder in the final over, right after the six. Ultimately it was Pollard’s late frenzy that took Mumbai to a somewhat respectable total although, Warner and Saha had other idea.

SRH will now take on RCB in the Playoffs Eliminator on Friday (November 6).