IPL 2019, Rajasthan vs Kolkata: How the action unfolded

Team Kolkata defeated Rajasthan by 8 wickets in the 21st match of the 12th edition of the Indian Premier League (IPL) at the Sawai Mansingh Stadium, Jaipur on Sunday. 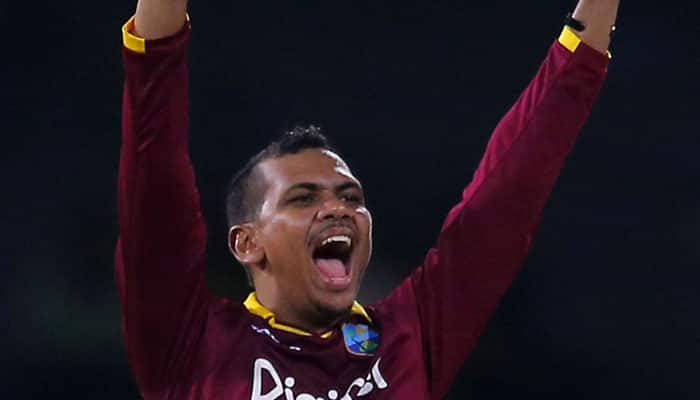 Team Kolkata, led by Dinesh Karthik defeated Ajinkya Rahane-led Rajasthan by 8 wickets, after being handed a target of 140 runs to chase.

# Stokes bowls a wide off the fifth delivery of the over, as Kolkata beat Rajasthan by 8 wickets after being handed a target of 140.

# Boundary scored from the first delivery following an edge off the pad, bringing the runs required for victory down to 3!

# Ben Stokes into the attack!

# Shreyas Gopal to bowl his final over!

# Shubman Gill is the new batsman in!

# Wicket! Lynn departs for 50 off 32 deliveries as he attempts to go for another big hit after a six off the first delivery, handing a catch to Midhun at deep backward square leg.

# Shreyas Gopal to bowl his third over of the innings!

# Lynn smashes his sixth boundary of the innings, cutting the ball for a boundary.

# Boundary off the first delivery as Uthappa smashes the flighted ball over cover for a boundary!

# Midhun to bowl his second over!

# Robin Uthappa is the new man in!

# Wicket! Narine departs for a 25 ball 47 as the batsman attempts to go for his third six of the night, but fails to properly connect off the flat googly handing a catch to Steve Smith at slip.

# Six off the first delivery of the over as Lynn smashes the ball over deep square leg for a big six!

# Shreyas Gopal to bowl his second over!

# Narine finishes the over with another six hitting the ball over deep mid-wicket, to make it 16 runs from the over!

# 6 runs off the fourth delivery of the over, as Narine smashes the ball over deep square leg having conceded just four runs off three deliveries!

# Another leg-spinner Sudhesan Midhun into the attack!

# Three runs off the over, as Gopal makes it difficult to score for Lynn and Narine with his variations in length, pace.

# Kolkata 65/0 (6 overs) with 11 runs off Dhawal Kulkarni's second over comprising of two boundaries.

# This is the fastest team fifty by any franchise in this edition of the tournament!

# Six off the first delivery as Lynn smashes the short ball over long-on, with the ball going on to clear the fence! Kolkata 52/0 (4.1 overs)

# Jofra Archer to bowl his second over of the innings!

# Boundary off the second delivery as the delivery goes on to hit the leg stump, before crossing over for a boundary.

# Narine is deceived by a slower delivery off the first ball, resulting in a top edge which fielder Rahul Tripathi spills.

# Dhawal Kulkarni to bowl his second over!

# Four runs off the over, as Lynn smashes his third boundary of the innings at square third man. Kolkata 36/0 (3 overs)

# Narine takes on Gowtham, smashing him for 22 runs off the over. The Windies batsman smashed four boundaries and a six off the over. Kolkata 32/0 (2 overs)

# Krishnappa Gowtham to bowl the second over!

# 10 runs from the opening over as Lynn gets Kolkata off to a good start with boundaries off the second and fourth delivery of the over. Kolkata 10/0 (1 over)

# Kolkata openers Sunil Narine and Chris Lynn are set to kickstart the chase with Dhawal Kulkarni to bowl the opening over!

# Boundary off the fifth delivery as Smith opens the face of the ball, directs the delivery in the gap between short third and point!

# Just a single off the first two deliveries with Smith on strike for the remaining deliveries!

# Harry Gurney to bowl the final over of the innings!

# Boundary off the third delivery, as Smith scores off an outside edge!

# Prasidh Krishna to bowl his final over!

# Six off the third ball as Smith comes down the pitch and hits the ball into the stands!

# No runs off the first two deliveries as Smith fails to score off the slow, turning deliveries!

# Change of gloves for Ben Stokes as Rajasthan complete singles off the first three deliveries!

# Single off the first delivery, with Stokes on strike!

# Kuldeep Yadav to bowl his final over!

# Ben Stokes is the new man in!

# Wicket! Rahul Tripathi dismissed for 6 runs off 8 deliveries as the batsman attempts to go for a big hit, without proper elevation resulting in a top-edge to Piyush Chawla who makes no mistakes.

# Harry Gurney to bowl his third over of the innings!

# Team Rajasthan score 12 runs off the over, as Smith scores two boundaries off the over to register his first half-century in this edition of the IPL.

# Prasidh Krishna to bowl his third over of the innings!

# 7 runs off the over, as Smith is nearly dismissed following a quick single! Rajasthan 91/2 (14 overs)

# Narine to bowl his third over of the innings!

# Rahul Tripathi is the new man in!

# Wicket! Buttler attempts to go for a consecutive six off the fifth delivery, but fails to connect effectively resulting in a catch to Shubman Gill.

# Buttler smashes the first six of the innings off the fourth delivery of the over, picking the short, slower delivery to smash it over deep square leg.

# Harry Gurney into the attack, to bowl his second over!

# Kuldeep Yadav to bowl his third over!

# 3 runs from the over, as Gurney nearly deceives Smith off the first delivery which was bowled slowly,!

# Smith follows it up with a second boundary off the over, hitting the ball against the spin!

# Boundary off the first delivery as Buttler reverse sweeps the flighted delivery over backward point!

# Kuldeep Yadav to bowl his second over of the innings!

# First boundary in a couple of overs for Rajasthan as Smith cuts the fourth delivery of the over towards backward point!

# Sunil Narine to bowl his second over!

# A comparatively better over for Rajasthan with 7 runs scored following two doubles and 3 singles off the over.

# This the lowest powerplay score for Rajasthan this season!

# 2 runs off the over, as Chawla deceives the batsmen with his variations in line and length on a slow track. Rajasthan 25/1 (5 overs)

# Chawla to bowl his third over!

# Singles off the remaining three deliveries of the over, Rajasthan 23/1 (4 overs)

# Buttler makes it 2 in 2 scoring a consecutive boundary off the third delivery, paddling the ball over fine leg!

# Buttler continues to score at a consistent rate on a slow track, directing the ball to deep mid-wicket for a boundary off the second delivery!

# Prasidh Krishna to bowl his second over!

# Just a run following the boundary off the final delivery, with 6 runs conceded off the over. Rajasthan 12/1 (3 overs)

# Boundary off the second delivery as Buttler smashes the short ball behind square, following a single off the first ball!

# Chawla to bowl his second over!

# No runs off the next two deliveries as Smith struggles to score off the deliveries bowled at good length!

# Steve Smith is the next batsman in!

# Wicket! Ajinkya Rahane dismissed for 5 runs off 7 deliveries off the first ball, with the batsman adjudged lbw. Rajasthan 5/1 (1.1 overs)

# Prasidh Krishna to bowl the second over!

# 5 runs from the first over as Rahane smashes a boundary over mid-wicket while going down on one knee off the fourth delivery of the over. Single off the final delivery. Rajasthan 5/0 (1 over)

# Rajasthan openers Jos Butler and Ajinkya Rahane have entered the crease with Piyush Chawla set to bowl the opening over!

# The clash is set to kick off within a few minutes!

# Sanju Samson misses out for Rajasthan due to injury!

# Gurney is set to play his first match in the Indian Premier League tonight!

# Harry Gurney has been included in the lineup in place of Lockie Ferguson!

# Kolkata win the toss and opt to field!

# Rajasthan registered their maiden win in IPL-12 against Bangalore in their last clash, emerging victorious by seven wickets!

High on confidence after their maiden victory, Rajasthan will look to carry the momentum by exploiting familiar conditions when they host a rampaging Kolkata in the IPL on Sunday.

The visitors will also be brimming with confidence with their batsmen Nitish Rana, Andre Russell and Robin Uthappa in top form.

Rajasthan bowlers Jofra Archer, Jaydev Unadkat and Ben Stokes have leaked runs in the death overs. They will have to rethink their strategy after Russell's sensational display of power hitting (48 off 13 balls) against Bangalore.

Kolkata will head to the game with the belief that the side can win from any situation, which they have demonstrated time and again.