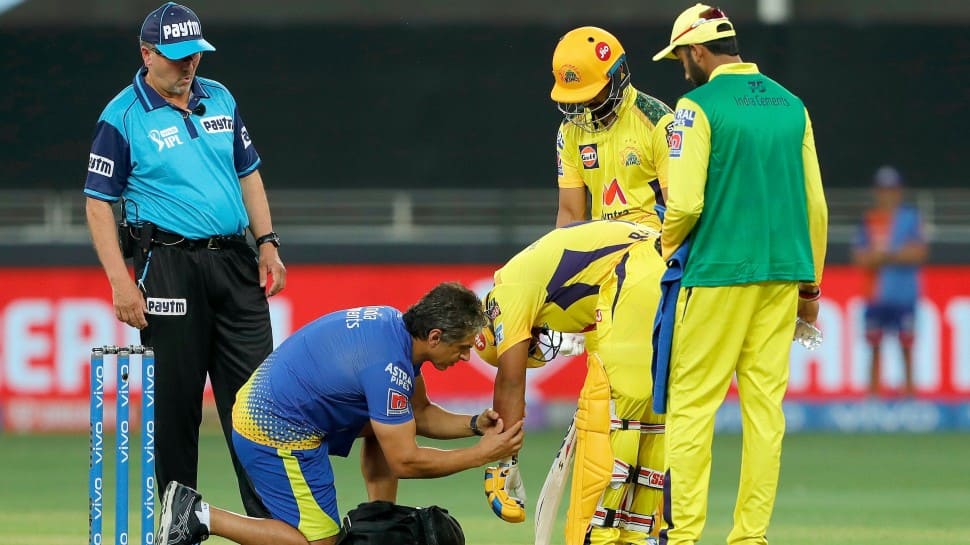 CSK's Ambati Rayudu being treated for injury in their IPL 2021 match against Mumbai Indians. (Source: Twitter)
Share:
Written By:

After registering a thrilling 20-run win over Mumbai Indians in the ongoing Indian Premier League (IPL) 2021, Chennai Super Kings (CSK) Stephen Fleming hailed opening batsman Ruturaj Gaikwad for playing a match-winning 88-run knock. For CSK, Gaikwad had played an unbeaten innings of 88 runs as the MS Dhoni-led outfit posted 156/6 in the allotted twenty overs after being 24/4 inside the powerplay.

“Yeah, it was very special. We have had tabs on him since some time. Even last time we were here, we rushed him back given the shape he was in from COVID-19 because that’s how much regard and respect we have for his ability. The way he finished off the IPL last year in Dubai set him up for the first part in India and innings against Mumbai Indians was really special,” said Fleming during a virtual press post-match conference.

“When you are the one to give your team a chance, that is even more special so the way he went about his work and absorbed pressure, it was really down to his hand that we were able to create pressure so it was a remarkable innings really,” he added.

When asked about the fitness update on Ambati Rayudu and Deepak Chahar, Fleming said: “Rayudu’s X-Ray was clear, it was just a bad bruise at that stage and he lost little bit of grip. We feared that it might be broken but there is good news. Deepak Chahar had a cramp, we will check that, fingers crossed, they both will come through reasonably okay.”

Talking about the batting depth, Fleming said: “We are a little bitt spoilt to have Dwayne Bravo at number eight and Shardul Thakur Thakur at nine. It is not by accident, we have designed it that way so that we could keep a faster tempo. It is good to have the depth and quality of batsmanship way down to number nine.”

For CSK, Dwayne Bravo scalped three wickets and Deepak Chahar took two. For Mumbai Indians, Saurabh Tiwary was the highest scorer after playing a knock of 50 runs. With this win, Chennai Super Kings went to the top of the IPL table while Mumbai is now in danger of falling outside the top 4 if they get on a losing streak. CSK will next lock horns against Royal Challengers Bangalore (RCB) on Friday (September 24).