In the eighth over of England's innings, Shreyas Iyer dived to his left in order to stop a powerful shot and jolted his shoulder. 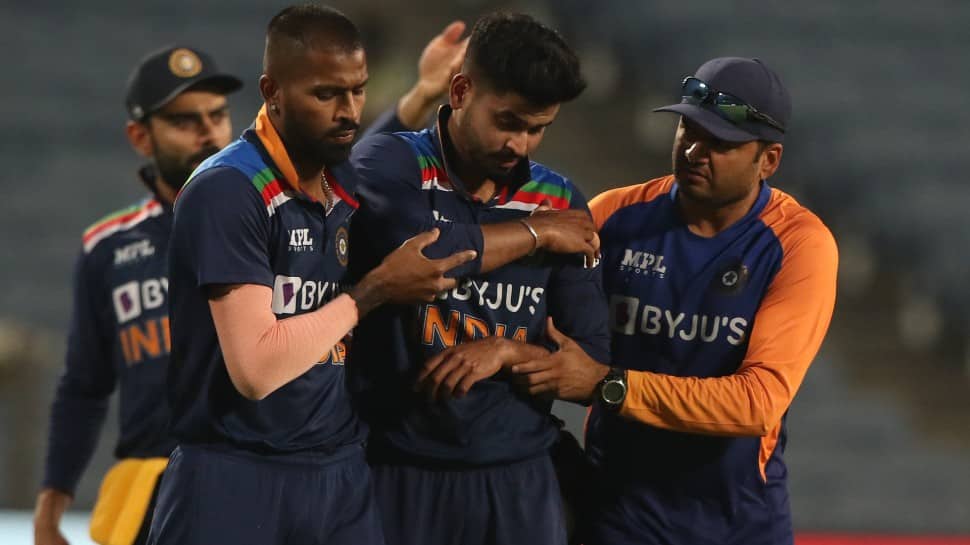 India batsman and Delhi Capitals skipper Shreyas Iyer subluxated his left shoulder during the England innings in the ongoing first ODI at the Maharashtra Cricket Association Stadium and he has been taken for further scans, informed the BCCI on Tuesday.

"Shreyas Iyer subluxated his left shoulder in the 8th over while fielding. He has been taken for further scans and won't take any further part in the game," said BCCI in a statement.

The injury will be a huge concern for the last season runner-up DC as Indian Premier League (IPL) 2021 is around the corner and the Iyer-led side are scheduled to open their campaign against Chennai Super Kings on April 10.

Meanwhile, India vice-captain Rohit Sharma also suffered a blow as he was hit on the right elbow while batting and didn’t take the field during England’s innings.

Commenting on Rohit's right elbow -- which received a knock while he was batting -- the BCCI in an official communication said: "Rohit Sharma was hit on the right elbow while batting and felt some pain later. He won't take the field."

While Rohit was hit while batting, Iyer had dived to his left in the field to stop the ball. While he did manage to cut runs off, he was holding the left shoulder in a lot of pain. He walked off holding the shoulder and Shubman Gill replaced him on the field.

England too suffered blows during the India innings in the afternoon. While skipper Eoin Morgan split the webbing between his right thumb and index finger, Sam Billings hurt his collar bone joint while fielding at the boundary.

England team spokesman said: "Eoin has split the webbing between his right thumb and index finger. He has had four stitches inserted by the England team doctor. He expects to be able to bat."

In Billings case, the English team spokesman said: "Sam Billings has sprained his collar bone joint. It's not related to the previous shoulder injury he suffered in 2019. It's sore, he's currently receiving treatment and we are hopeful he will be able to bat later".