One of the trolls posted a comment on a throwback picture of Jasprit Bumrah and Sanjana Ganesan, saying that the team is losing on the cricket field, but the couple has gone on a holiday.

Team India pacer Jasprit Bumrah has been sidelined from the Asia Cup 2022 due to injury. The Mumbai Indians pacer is recovering from a back injury at the NCA in Bengaluru. On Monday (September 5), Jasprit Bumrah’s wife Sanjana Ganesan posted a ‘throwback’ pic on social media with her husband on one of their vacations.

However, social media trolls didn’t waste any time to get after Bumrah since just a day earlier India had lost to arch-rivals Pakistan by five wickets in their Super 4 match in Asia Cup 2022.

One of the trolls posted a comment saying that the team is losing on the cricket field, but the couple has gone on a holiday. Sanjana was quick to call out the user’s ignorance saying, “Throwback photo hai, dikhta nahi kya chomu aadmi (It’s a throwback photo, can’t you see, you fool).”

Soon after Sanjana posted a detailed statement against trolls on social in an Instagram story. “While I do think it is important to stand up to internet trolls and bullies, I do not agree with dragging someone’s religion, nationality, ethnicity or identity into the matter and I sincerely urge you to consider doing the same. Internet trolls aren’t the way they are because of their religion, ethnicity or nationality, it’s just a lack of common sense. I promise to keep trying to make the internet a better place, taking down one chomu aadmi at a time,” Sanjana wrote. 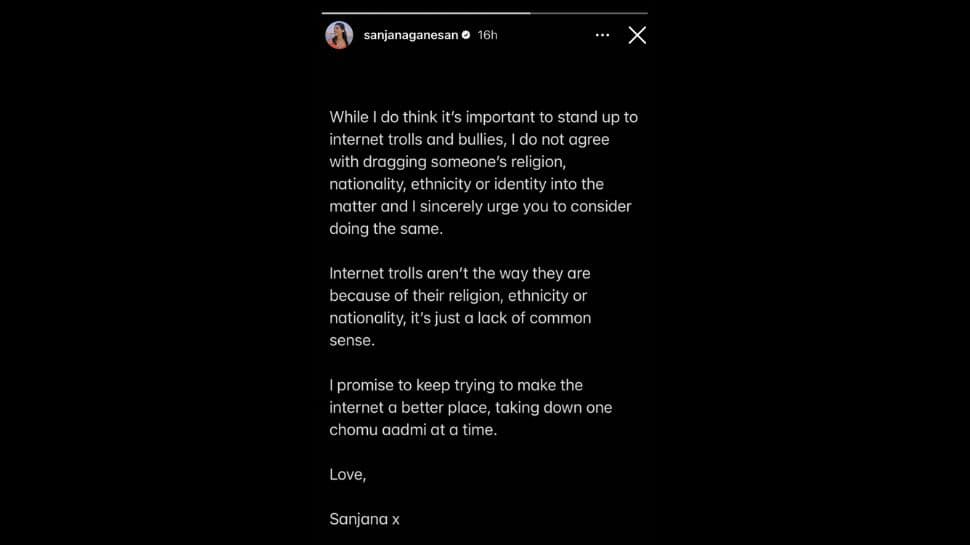 The incident came on the same day when another young Indian pacer Arshdeep Singh was trolled brutally and even his Wikipedia page was defaced with the trolls billing him a ‘Khalistani’. Arshdeep had dropped the catch of Pakistan batter Asif Ali in the 18th over which ultimately proved costly for India as they went on to lose the match.