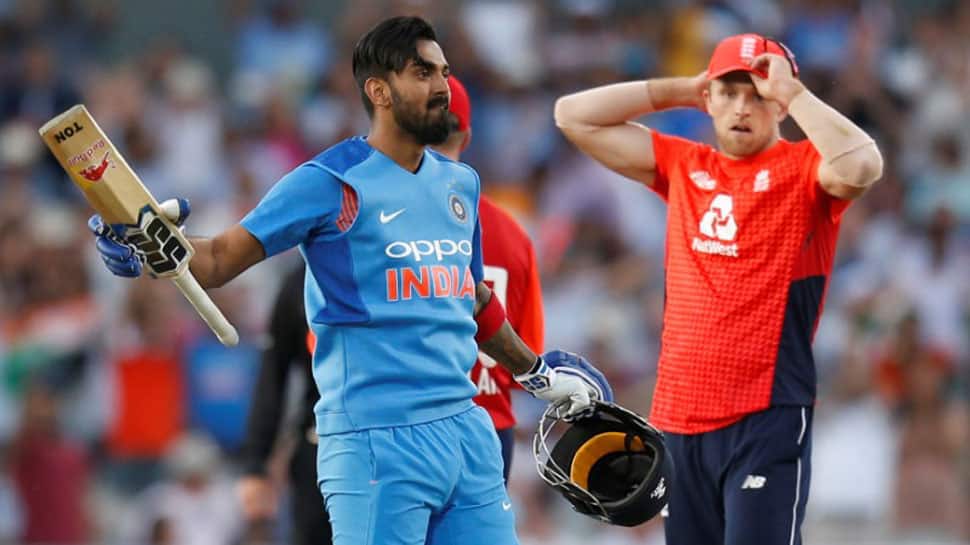 Manchester: Riding on a flashy unbeaten century from Lokesh Rahul and chinaman Kuldeep Yadav`s maiden T20 International fifer, India outclassed England by eight wickets in the opening match and go 1-0 up in the three-match rubber at the Old Trafford cricket stadium here on Tuesday.

Chasing 160, India quickly overcame the early loss of opener Shikhar Dhawan (4) as the right-handed duo of Rahul and Rohit helped the visitors race to 50 in the first five overs.

Rahul continued his glorious run with the bat, dominating the partnership with Rohit, who uncharacteristically played the perfect second fiddle to the Karnataka youngster.

Rahul started the onslaught right from the word go before meting out some special treatment to off-spinner Moeen Ali, whom he welcomed with a superb reverse sweep that yielded a boundary and followed up with a massive six over long on.

The right-hander then picked the leg-spinner Adil Rashid for a boundary to third man to get to his half-century off just 27 balls, before launching Liam Plunkett for two sixes and as many fours to milk 20 runs from the paceman .

With India comfortably placed at 103/1 midway through the innings, Rohit too stepped up the gas by launching Rashid for a towering six over mid-wicket before falling to the same bowler.

Rohit`s departure brought in skipper Virat Kohli (20 not out off 22 balls), who was seven shy of becoming the fourth batsman to notch 2000 T20I runs.

Kohli, not only got to the landmark but also ensured Rahul get to his deserving second T20I century with a single before the skipper finished off in style with a thunderous six off Ali to guide India home.

Earlier, England had themselves to blame for wasting a sound 50-run opening start from Jason Roy (30) and Jos Buttler (69) as Kuldeep (5/24) triggered a collapse that saw Alex Hales (8), Eoin Morgan (7), Jonny Bairstow (0) and Joe Root (0) departing in quick succession -- the latter three in a span of four deliveries.

Buttler, however continued tormenting the Indians with a 46-ball knock laced with eight fours and a couple of sixes before becoming Kuldeep`s fifth victim, thanks to a brilliant catch by Kohli after Rahul dropped him one ball earlier.

Towards the end, lower order bat David Willey`s unbeaten 29 off 15 balls helped England to some sort of respectability.