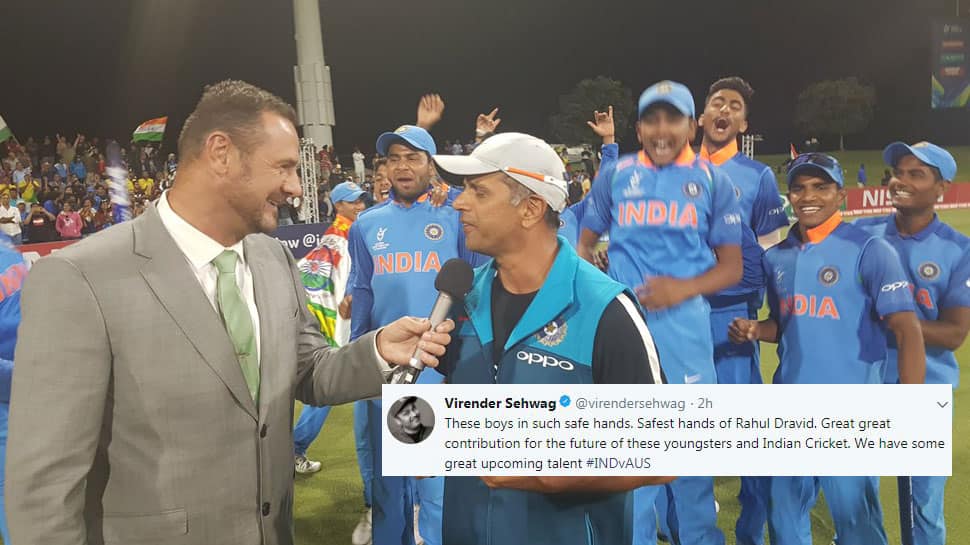 Tauranga (New Zealand): The elated youngsters of the India U-19 cannot keep calm. And why should they? They have achieved a huge feat, have created a record by winning the Under 19 cricket World Cup for the fourth time, beating Australia by eight wickets to lift the trophy at Bay Oval in Mount Maunganui, New Zealand.

Head coach Rahul Dravid deserves all the applause and appreciation for mentoring the team, but the man of the hour thinks otherwise. Embarrassed by all the attention that is coming his way, he said: "I am really proud of the boys and the effort they put in. I don't want to mention names, but everyone in the support staff has put in a great effort."

And as expected, Twitter can't keep calm and is showering all the love for Dravid and the team.

These boys in such safe hands. Safest hands of Rahul Dravid. Great great contribution for the future of these youngsters and Indian Cricket. We have some great upcoming talent #INDvAUS

What a moment for these boys. Feel so so happy for them and am reminded of our triumph 18 years ago. Great effort by Rahul Dravid and these guys have a great future. #under19worldcup pic.twitter.com/Cu2Mrm2FJ4

For he deserves it the most!

Finally a World Cup for Rahul Dravid!
No one deserves it more than him!#U19CWC

For some, this will be the biggest moment in their lives. But as Rahul Dravid said, they must look upon this as a stepping stone. #ICCU19CWC

Rahul Dravid cracks me up. Speaks during interview about how embarrassed he is sometimes as coach of India U-19 because too much attention is put on him because of his stature rather than the players and support staff. Class act. World cricket needs more of him.

Rahul Dravid : It's embarrassing that I get a lot of credit & attention around whole team's success. There are a lot of members in the support staff who have been equally valuable & wonderful bench of players.

Ravi Shastri : Where are the experts now?#Difference

And remember the moment when Dravid is on air while the young boys are cheering on? We only wonder what will be the scenes in the dressing room today.

This is Cute Rahul Dravid trying to give interview to TV and U19 boys shouting behind him but Dravid still serious about what he does... __

Congrats to the U19 Boys in Blue __ for winning the #CWCU19__ Loved the celebration _ Rahul Dravid take a bow. #INDvAUS #kalra #undefeated

For me the scene of the day is the entire bunch jumping behind Rahul Dravid while he is on air!! That's some amount of space and freedom of expression in the young team! Kudos to Rahul for that.

Every time this man takes charge of something, the job done is a class apart! Thank You, Rahul Dravid! ____ #WhistlePodu pic.twitter.com/JHIHwUgPw5

While the team celebrates, coach Dravid has a word for the youngsters: "I am really proud of the boys and the effort they put in. Proud of the effort they put in and couldn't be happier for them. Hopefully, it's a memory they cherish for a long, long time, but hopefully not the lasting memory and they have many more great moments and bigger things in future."