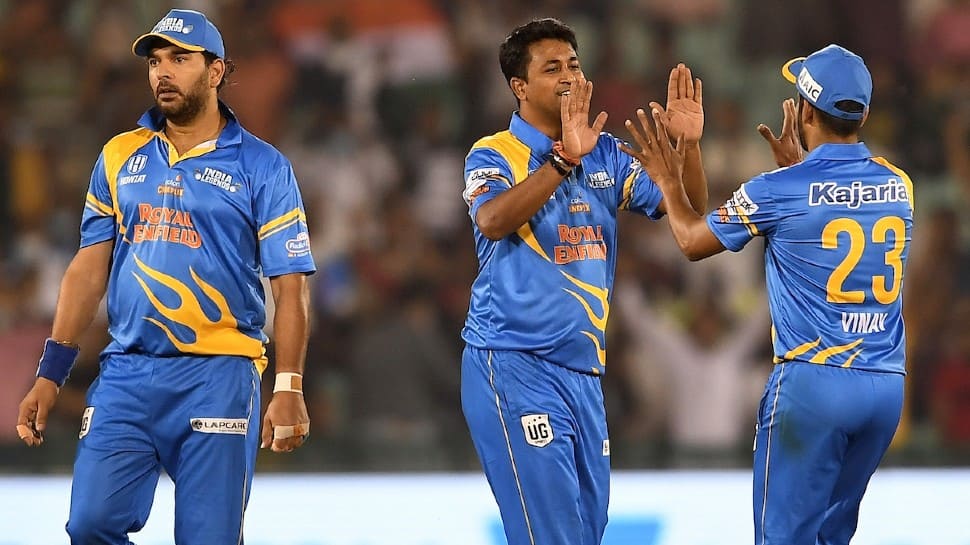 India Legends advanced to the final of the Road Safety World Series on Wednesday after beating West Indies Legends by 12 runs in the thrilling first semifinal at the Shaheed Veer Narayan Singh International Cricket Stadium in Raipur.

After put to bat first, India Legends rode on skipper Sachin Tendulkar’s 65 and Yuvraj Singh’s unbeaten 49 to accumulate 218/3 at the end of 20 overs.

47-year-old Tendulkar smashed six fours and 3 sixes during his whirlwind knock which also included a very good looking pull shot, while Yuvraj Singh smashed 6 sixes, out of which four came in a single over of Mahendra Nagamootoo. Also, Virender Sehwag and Yusuf Pathan contributed with bat having scored quickfire 35 and 37 respectively to help the hosts set a challenging target for the Windies.

Chasing 219-run to win, Brian Lara-led West Indies went neck-to-neck with their opposition with the help of Dwayne Smith (63) and Narsingh Deonarine (59) and kept Tendulkar’s side under pressure for most part of their innings.

Needing 24 in 12 balls, Indian seamers R Vinay Kumar and Irfan Pathan bowled their heart out to help their win which was once going the visitors' way.

Vinay Kumar took two wickets of -- captain Brian Lara (46) and Tino Best at a crucial juncture in the 18th over that brought them back into the game, while Pathan gave just five runs in the last over as India restricted West Indies Legends for 206/6, thus winning the match by 12 runs.

With the victory, India enter the final of the tournament, where they will meet the winner of the semifinal 2 - Sri Lanka or South Africa, on March 21.