Yuvraj, who holds the record for hitting Stuart Broad for six sixes in an over, remained unbeaten on 49 from 20 deliveries and he overall smashed six maximums in the match as India Legends posted a gigantic 218/3 in 20 overs against West Indies Legends. 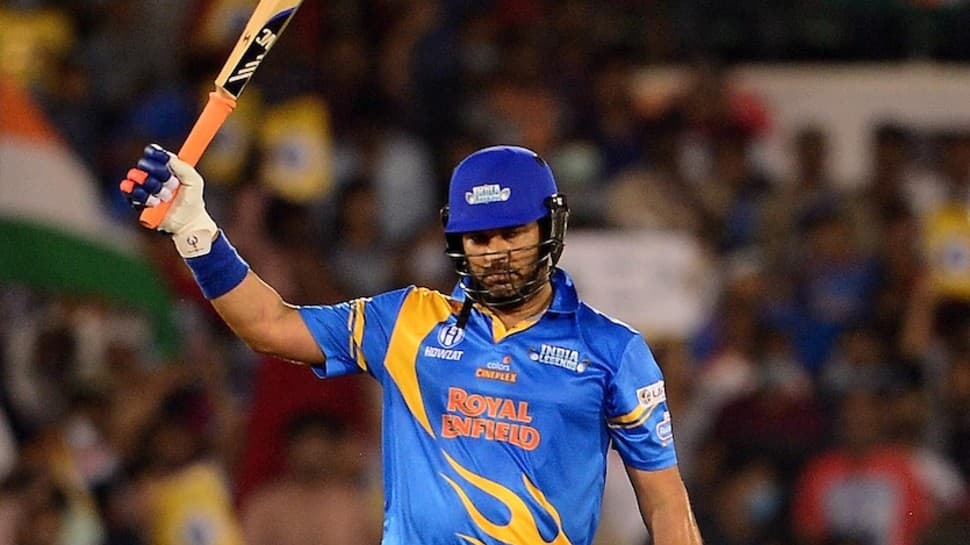 India Legends player Yuvraj Singh once again took the fans down the memory lane as he smashed four sixes in an over against West Indies in the first semi-final of Road Safety World Series T20 on Wednesday (March 17).

Yuvraj, who holds the record for hitting Stuart Broad for six sixes in an over, remained unbeaten on 49 from 20 deliveries and he overall smashed six maximums in the match as the hosts posted a gigantic 218/3 in 20 overs after they were put to bat first.

The carnage from Yuvraj came in the 19th over, which was bowled by Mahendra Nagamootoo. The southpaw sent first three balls of the over into the stands before missing the fourth delivery. Yuvi then smashed a six on the fifth delivery as well and missed the last ball. The over read – 6, 6, 6, 0, 6, 0.

Notably, Yuvraj was dropped on 3 by Sulieman Benn.

Interestingly, this was the second time in the tournament that Yuvraj was on six-hitting spree, as on March 13, the southpaw smashed four consecutive sixes to Zander De Bruyn in the clash against South Africa Legends.

Talking about the match, Virender Sehwag scored quickfire 35, while India Legends skipper Sachin Tendulkar smashed 65 to help their side set a 219-run target for Brian Lara-led West Indies Legends in the knock-out match.