Swedish environmental activist Thunberg has taken social media by storm through her rousing speech at the UN Climate Change Summit in New York. 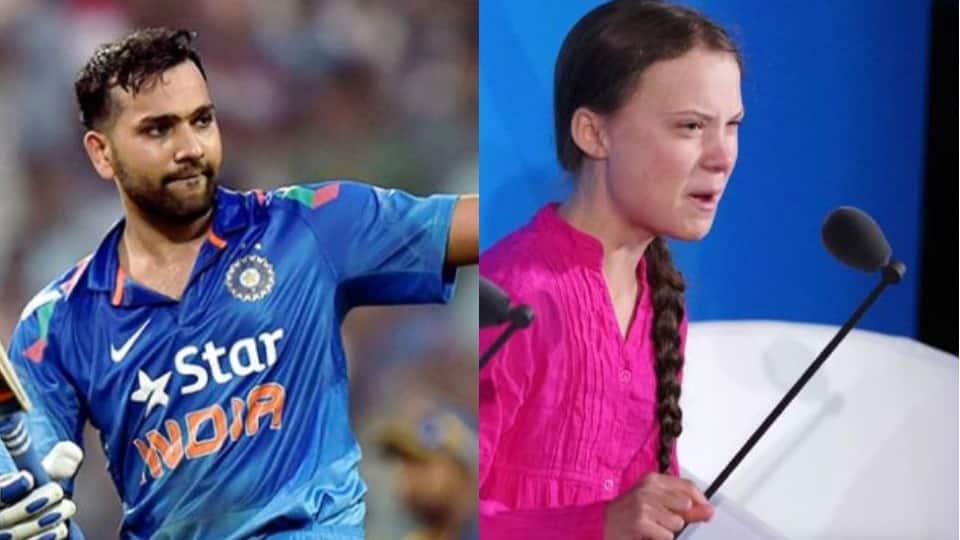 Greta Thunberg, the teenage Swedish environmental activist who has taken social media by storm through her rousing speech at the UN Climate Change Summit in New York, was lauded by India opening batsman Rohit Sharma who labeled her as `an inspiration`.

"Leaving the saving of our planet to our children is utterly unfair. @GretaThunberg, you`re an inspiration. There are no excuses now. We owe the future generations a safe planet. The time for change is now," Sharma tweeted on Tuesday.

Leaving the saving of our planet to our children is utterly unfair. @GretaThunberg, you're an inspiration. There are no excuses now. We owe the future generations a safe planet. The time for change is now.https://t.co/THGynCSLSI

16-year-old Thunberg has taken a year off from her studies to spread awareness about climate change.

"You have stolen my dreams and my childhood with your empty words. We are in the beginning of mass extinction and all you can talk about is money and fairy tales of eternal economic growth - how dare you," Thunberg said at the UN Climate Change Summit.

Thunberg, who has become the global face of the growing youth movement against climate inaction, began her speech by telling her audience amusingly, "My message is that we will be watching you."

In her speech, the activist also addressed the pressing issue of the dangerous global heating across the world, saying, "I shouldn`t be here. I should have been back at school, on the other side of the ocean. Yet you all come to us young people for hope. How dare you?"

"For more than 30 years, the signs have been crystal clear. How dare you continue to look away and come here saying that you are doing enough when the politics and the solution needed are still nowhere in sight," she added.

Thunberg has been protesting outside the Swedish Parliament every Friday since August 2018 against inaction over climate change.

The Climate Change summit was hosted by UN Secretary-General Antonio Guterres to give a boost to the 2015 Paris Agreement and address the global climate emergency.

On the other hand, Sharma is all set to open the batting for India in the upcoming Test series against South Africa after KL Rahul`s omission from the team.

India will take on South Africa in a two-match Test series, slated to begin from October 2. The series will be a part of World Test Championship.