A video shared by the Board of Control for Cricket in India (BCCI) on Tuesday Yuzvendra Chahal said that he wants to bowl Rohit Sharma in IPL. Replying to his statement Sharma said,"I have to take him for dinner tonight." 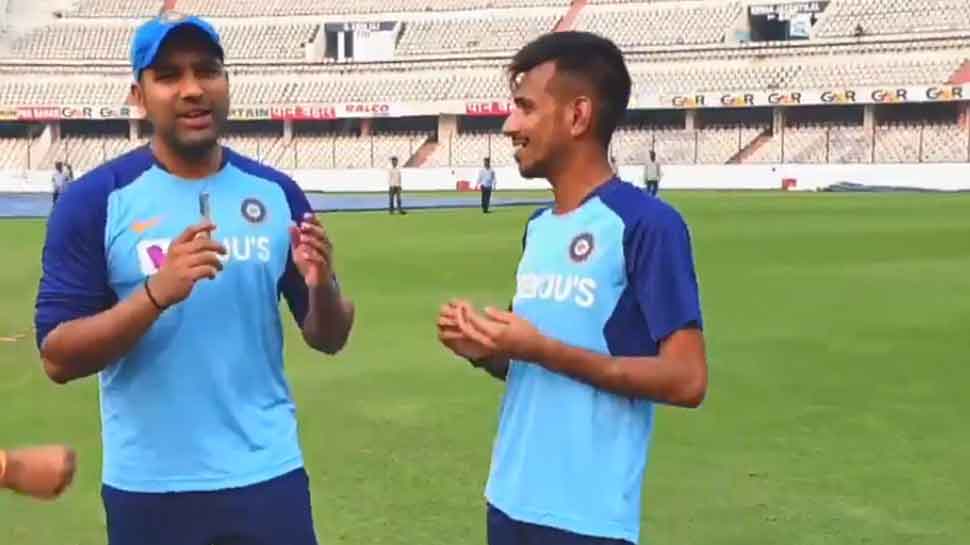 Mumbai: India opener Rohit Sharma and spinner Yuzvendra Chahal have often been seen sharing fun time off the field and now the Mumbai batsman has promised a "dinner" treat for his junior.

Both are currently playing in India's three-match T20I series against the West Indies.

A video shared by the Board of Control for Cricket in India (BCCI) on Tuesday that also featured Kuldeep Yadav, was captioned: "Rapidfire ft. Kuldeep, Chahal and the HITMAN. Many fun facts from the spin twins @yuzi_chahal & @imkuldeep18 on the questions curated by @ImRo45."

MUST WATCH: Rapidfire ft. Kuldeep, Chahal and the HITMAN

In the video, Rohit was seen asking Chahal: "One batsman you wouldn't want to bowl to?"

"You (Rohit Sharma) in the Indian Premier League (IPL). Everyone says that when you are on 20-25 runs, already settled, it becomes difficult to bowl as you play shots all across the park," Chahal responded.

In return, Rohit said: "I have to take him for dinner tonight."

Kuldeep too recalled his T20 debut for Kolkata Knight Riders (KKR) in Hyderabad.

Rohit also asked both who is the worst dancer in Team India to which both the spinning duo replied with the name of all-rounder Shivam Dube.

India won the first T20I in Hyderabad by six wickets but lost the second affair by eight wickets in Thiruvananthapuram on Sunday as the three-match series got levelled.

The third and final contest of the rubber will be played in Mumbai's Wankhede Stadium here on Wednesday.

I do not want to continue from June 2020: ICC chairman Shashank Manohar