Sending Dhoni to bat at No. 7 was a team decision: Ravi Shastri

India head coach Ravi Shastri revealed that sending M.S. Dhoni to bat at No. 7 in their 18-run World Cup semifinal loss to New Zealand was a team decision. 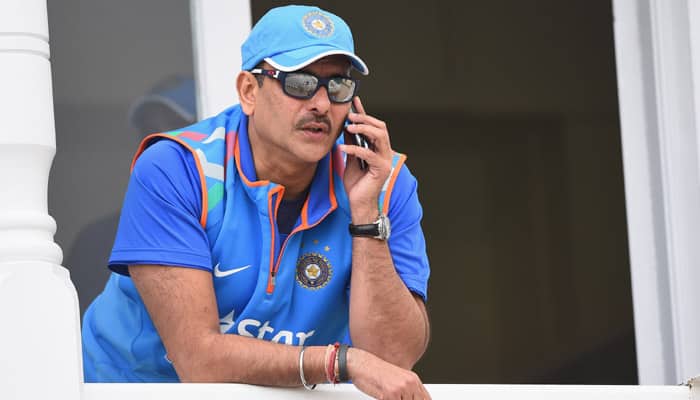 London: India head coach Ravi Shastri revealed that sending M.S. Dhoni to bat at No. 7 in their 18-run World Cup semifinal loss to New Zealand was a team decision.

In the first semifinal which was played over two days due to rain in Manchester, India restricted the Black Caps to 239/8 in 50 overs. But chasing the modest 240 for a place in the final, India were blown away by the Kiwi bowlers led by Matt Henry (3/37) on the reserve day.

India lost four top order batsmen for just 24 runs inside 10 overs before Ravindra Jadeja (77) and Dhoni (50) shared a 116-run seventh wicket stand to raise hopes of an unlikely victory. However, it wasn't enough in the end as India fell short by 18 runs.

But Dhoni was sent in to bat after Dinesh Karthik who came in at No. 5 followed by Hardik Pandya, raising quite a few eyebrows.

"It was a team decision. Everyone was in with it -- and it was a simple decision, too. Last thing you wanted was Dhoni coming out to bat early and getting out -- that would have killed the chase," Shastri was quoted as saying by the Indian Express.

"We needed his experience later. He is the greatest finisher of all times -- and it would have been criminal to not make use of him in that way. The whole team was clear on it," Shastri reasoned.

India came into the tournament as one of the favourites to lift the crown. Throughout the group stages of the 10-team event, the Men in Blue played true to their favourites tag by winning seven of the eight games with the one against the Kiwis getting called off due to rain. They lost to England, but still managed to top the group with 15 points from nine matches.

It was in the semifinal that they stumbled and Shastri, like skipper Virat Kohli and vice-captain Rohit Sharma, said 30 minutes of bad cricket cannot undermine the fact that India were good throughout the campaign.

"Walk out with your heads held high. Be proud. Those 30 minutes can't erase the fact that you guys have been the best team in the last couple of years. You guys know it. One tournament, one series a" and that, too, 30 minutes of play can't decide that. You guys have earned that respect. Of course, we are all hurt and disappointed but, in the end, be proud of what you have done for the last two years.," Shastri said to the Indian team, he revealed to the Indian Express.

Asked about India's long standing problem of finding a stable No. 4 batsman, Shastri admitted that has been a area of concern and in the long run, the team needs a solid batter there.

"In hindsight, yes, we did need a solid batsman out there in the middle order. But now, that's something for the future. That's a position that was always giving us problems, but we just couldn't nail it. (K.L.) Rahul was there but then Shikhar Dhawan got injured. Then Vijay Shankar was there, and he got injured. We just couldn't control it."

Shastri added that this Indian team is on the right path and with a couple of youngsters in the batting order, it would be more stronger."This is a tough team. A magnificent team. Look at how we bowled. The way the batsmen batted. A couple of youngsters might come in the middle and make this even more stronger. It's a team on the right path a" they know it.

"When you have played good and tough cricket for the last 30 months, this loss in the semi-final would hurt. It's a tough pill to swallow and we are all gutted, but this is sport. That's why we play it," he concluded.

Mahendra Singh Dhoni, the swashbuckling player who excelled like none other on the cricket field