Wade also got into an argument with Jadeja after Glenn Maxwell's dismissal in the ongoing fourth Test here, continuing the hostilities between the two sides. 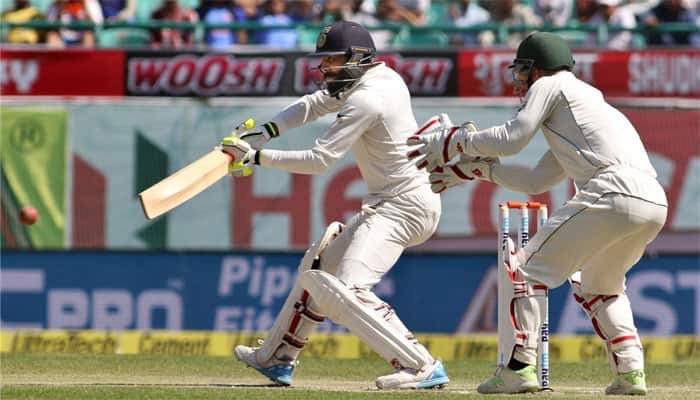 New Delhi: Australian wicket-keeper Matthew Wade and India's spin-bowing all rounder Ravindra Jadeja had a lengthy war of words, which seemed to have inspired the the latter even more as he went on to hit a brilliant half-century before claiming three crucial Aussie wickets.

While sledging has been an ever-present matter of discussion in the whole series, many wondered if the absence of Virat Kohli will keep the visitors more silent considering their prime target isn't present on field.

However, the Day 3 of Dharamsala Test saw one of the most long-standing and grueling sledging incident take place between Jadeja and Wade.

The war of words started again in next over.

Nathan Lyon bowls the last ball of the over.

That wasn't all, Wade got into an argument with Jadeja after Glenn Maxwell's dismissal in the ongoing fourth Test here, continuing the hostilities between the two sides.

The incident took place in the 33rd over of Australia's second innings after Maxwell was adjudged LBW by South African umpire Marais Erasmus.

Maxwell predictably took a DRS, which remained umpire's call even though it looked tight in TV replays.

As Maxwell started walking, an angry Wade tried to approach the melee of Indian players but Ravichandran Ashwin came in between and held back the Aussie keeper.

Wade was having an argument with Jadeja, who seemed equally involved before another player pulled him aside.

Wade was fuming and as he walked back to his crease, he was seen having another round of discussion with Murali Vijay. The two umpires then called India's stand-in skipper Ajinkya Rahane and Jadeja for a chat to cool things down.

WATCH: Ajinkya Rahane cannot believe it after taking a super catch to dismiss Peter Handscomb on Day 3 of Ind-Aus Test