T20 World Cup 2021: Australia beat South Africa in a low-scoring thriller to open their campaign with a win

Chasing a paltry 119, Australia suffered many hiccups before they crossed the finishing line in the final over of the match. 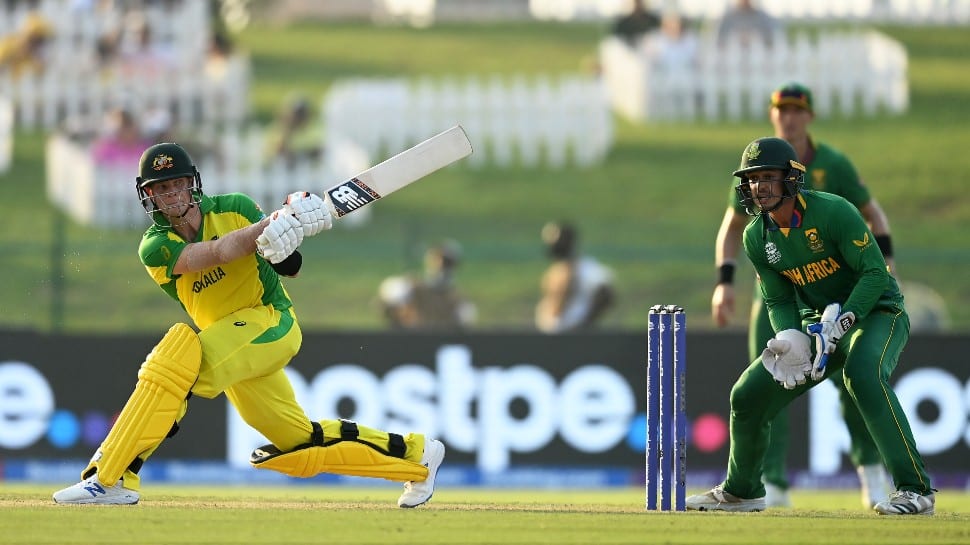 Australia had some nervous moments in the chase but overcame them to beat South Africa by five wickets in a Group 1 match of Super 12 of the ICC Men's T20 World Cup at the Sheikh Zayed Stadium here on Saturday. With this win, Australia got their campaign in the tournament off to a winning start despite South Africa taking the match till the final over.

Chasing a paltry 119, Australia lost openers Aaron Finch and David Warner in the power-play. While Finch sliced to third man off Anrich Nortje, Warner drove straight to point off Kagiso Rabada. After the power-play, Mitchell Marsh holed out to deep mid-wicket off Keshav Maharaj.

Steve Smith and Glenn Maxwell put on a stand of 42 runs in as many balls for the fourth wicket. The duo played risk-free cricket, rotated the strike, and dispatched rare loose balls to boundaries. The pick of the shots from the partnership was Smith creating room and going inside-out on backfoot over extra cover off a short ball from Maharaj in the 13th over.

Just as the partnership looked to go big, Aiden Markram pulled off a stunning running and diving catch from long-on to send Smith back to the pavilion. In the next over, Maxwell decided to break free with a switch hit but was cleaned up by Tabraiz Shamsi.

Matthew Wade took two fours off Rabada in the 17th over, including a dropped chance by Markram at mid-off. Marcus Stoinis thumped a back of the length delivery from Nortje for four, soothing nerves in the Australian camp. Stoinis then slammed a straight drive followed by a heave over deep mid-wicket off Pretorius in the final over to seal Australia's victory with two balls to spare.