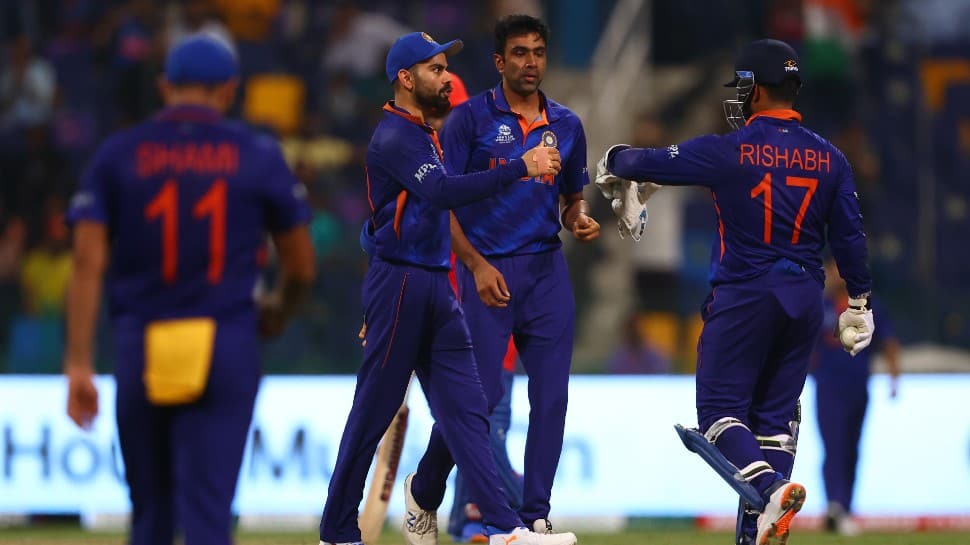 KL Rahul (50 off 19 balls) and Rohit Sharma (30 off 16 balls) went berserk in Power-play as India thrashed Scotland by eight wickets in a Group 2 match of the ICC Men's T20 World Cup at the Dubai International Stadium on Friday (November 5). After bowling out Scotland for 85, India made 89/2 with 81 balls to spare. The win means that India have a higher net run rate than Afghanistan and New Zealand.

As expected, Team India came out all guns blazing. Rohit Sharma began with a slice over point. In the next over, Rahul cracked three boundaries through leg-side off Bradley Wheal. Rahul, in the mood to finish things quickly, slammed back-to-back boundaries off Alasdair Evans followed by Sharma creaming a loft over extra cover.

Sharma welcomed Safyaan Sharif with a mighty six over deep mid-wicket. He went to collect two more fours to take India past the half-century mark in just 23 balls, the fastest team fifty of the tournament. Wheal came in for more thrashing from Rahul, taken apart for two boundaries. Sharma also pulled Wheal for four but the pacer had the last laugh, trapping him plumb lbw with a searing yorker.

The final stretch in Group 2

Which team will join Pakistan in the semis? #T20WorldCup pic.twitter.com/QOPXMnfSBP

Rahul blasted a four and six off Watt before taking a single to reach his half-century in just 18 balls. In an attempt to finish off things in style, Rahul holed out to long-on off the final ball of the power-play. Suryakumar Yadav finished the chase immediately after power-play with a six down the ground to seal India's second win of the tournament.

Earlier, George Munsey made a great start by whipping Jasprit Bumrah for a six over square leg. He went on to reverse sweep Varun Chakravarthy over the third man. But Bumrah made the first breakthrough for India, foxing Kyle Coetzer with a slower ball, which he chopped onto his stumps.

Munsey continued his fine show with the bat, smashing Ravichandran Ashwin for a hat-trick of fours in the fourth over, including reverse-sweeps on the last two. But Mohammed Shami brought Munsey's promising stay to a halt as he hit straight to mid-on in a wicket-maiden final over of power-play.

Jadeja made double strikes in the seventh over, taking out Richie Berrington and Matthew Cross in four balls. While Berrington missed one turning away and crashing to his middle stump, Cross was trapped plumb lbw on backfoot. Michael Leask swept Chakravarthy for a four before hooking and slapping Shami for a six and four respectively in the next over. But in an attempt to slog-sweep Jadeja in the 12th over, Leask missed the delivery and was trapped plumb in front of the middle stump.

Two overs, Chris Greaves holed out to long-off off Ashwin as Scotland plunged into deep trouble. Shami's third over of the match saw him clean bowl Calum MacLeod on the first ball. Safyaan Sharif wandered outside the crease and was run out by Ishan Kishan running from mid-wicket. Shami had another wicket with the yorker, claiming Alasdair Evans. Bumrah wrapped the innings by ratting Mark Watt's leg-stump to become the leading wicket-taker for India in T20Is.

T20 World Cup 2021: What India needs to do to qualify for semi-finals after win over Scotland?