Ramdin, who ended on 26 off 31 balls, knocked off the winning run off the last ball of the 19th over to complete a three-wicket victory with an over to spare. 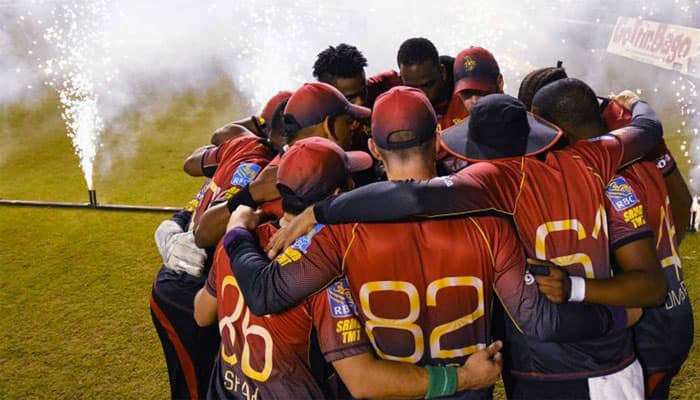 Batting first, the Patriots lost Chris Gayle and Evin Lewis and slumped to 37/3 before Carlos Brathwaite’s 30 pushed the score to 135/6.

Sheldon Cottrell’s double strike in his opening over put the Knight Riders on the backfoot immediately before Mohammed Hafeez removed Colin Munro and Darren Bravo off successive overs.

The Knight Riders run-chase was in tatters at 90/7, but Denesh Ramdin held the innings together with 26 off 31 balls and Cooper hit a flurry of boundaries late to clinch victory in front of a delirious partisan crowd at Tarouba.

The victory was sweet revenge for the Knight Riders, who had won eight of their 10 preliminary matches before a humiliating loss to St Kitts and Nevis Patriots in the first play-off on Tuesday.

The Patriots, despite the loss, could hold their heads up high as their appearance in the 2017 finals comes after a 2016 season when they finished last with only two wins in 10 matches.

Earlier, Dwayne Bravo’s decision to insert the St Kitts and Nevis Patriots paid immediate dividends when Javon Scantlebury claimed the wicket of Gayle (1) off the seventh ball of the innings.

The Barbadian would dismiss Hafeez (5) cheaply and Sunil Narine would dispose of the dangerous Lewis (16) to reduce the Patriots to 37/3 in the 8th over.

Narine was at his miserly best conceding only eight runs, with 18 scoreless deliveries in four overs.

Brandon King (19) and Devon Thomas had brisk but brief stays at the crease before Jonathan Carter (21) and Carlos Brathwaite combined for an important 6th wicket partnership of 49.

Brathwaite hit 30 off 25 balls and added a further 21 with Mohammed Nabi, who blazed 18 off only five balls.

The Patriots135/6 looked respectable on a slow surface at Tarouba.

The visitors were back in the game immediately with a double strike by Sheldon Cottrell.

The big Jamaican had Narine (3) caught and bowled and then disturbed Dwaye Bravo’s stumps second ball he faced for a duck.

Mohammed Hafeez tilted the balance towards the Patriots, claiming the wickets of Colin Munro for 29 off 23 balls and then the prized scalp of Darren Bravo for 1.

At 53/4 in the 9th over, the Knight Riders run chase was on the verge of collapsing and King’s amazing one-handed catch to dismiss Hamza Tariq (18) off Tabraiz Shamsi signalled that the tie had turned towards the Patriots.

Daniel Christian was run out 8, going for a chancy second run off Carter’s arm at 77/6 and Searles (2) holed out to Lewis at long on.

At 90/7, Kevon Cooper joined Denesh Ramdin and the pair kept the scoreboard ticking over until the last ball of the 18th over when Cooper launched a massive six over deep cover.

With 22 needed off the last two overs, Cooper hit another maximum off a Ben Hilfehaus no ball, struck the free hit for a boundary and pulled the penultimate delivery over midwicket for another four.

Ramdin, who ended on 26 off 31 balls, knocked off the winning run off the last ball of the 19th over to complete a three-wicket victory with an over to spare.

Cooper was 29 not out off 14 balls to celebrate his second victory in the Caribbean Premier League.

He was also victorious in 2015 when the team won as the Trinidad and Tobago Red Steel.