Virat Kohli, Anushka Sharma dine out with Sunil Chhetri and wife after India’s win over Australia 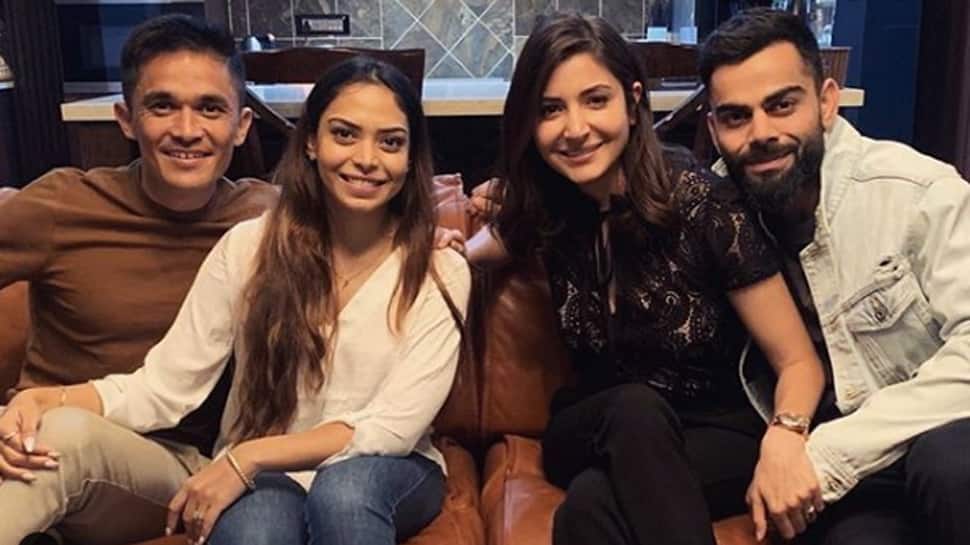 Indian skipper Virat Kohli along with actress wife Anushka Sharma dined out with national football team captain Sunil Chhetri and his wife Sonam Bhattacharya at their residence in Bengaluru following the Men in Blue's three-match ODI series win against Australia on Sunday.

Taking to her official Instagram account, Sonam shared a picture of the four and wrote that it was lovely hosting two wonderful people (Kohli and Anushka) for dinner.

"No phones (till we picked one up for this picture), no glance at the clock. Just four such different people speaking about everything under the sun.Was lovely hosting the two of you for dinner. You two are all kinds of wonderful!," she captioned the post.

All four of them were seen in a jolly mood as they pose for the photograph from the dinner get-together.

No phones (till we picked one up for this picture), no glance at the clock. Just four such different people speaking about everything under the sun. Was lovely hosting the two of you for dinner. You two are all kinds of wonderful!

In reply to Sonam's post, Anushka said that she and Kohli had a beautiful evening at Chhetri's residence and that a surprise visit can be on the cards.

"We had such a beautiful evening that don't be surprised if we land up at your house uninvited next time," the Bollywood actress commented.

On Sunday, India produced an all-round performance to beat Australia by seven wickets in the third and final ODI at the M. Chinnaswamy Stadium in Bengaluru clinch the three-match series 2-1.

Kohli (89) and Rohit Sharma (119) shared a mammoth 137-run partnership for the second wicket to help the Men in Blue chased down the target of 287 runs with 15 balls to spare.

Australia had earlier posted a total of 286/9 in their stipulated 50 overs after opting to bat first, thanks to Steve Smith's blistering 131-run knock off 132 balls and Marnus Labuschagne's crucial 54 runs.

Mohammad Shami was the pick of the bowlers for India with four wickets while Ravindra Jadeja bagged two wickets. Navdeep Saini and Kuldeep Yadav also chipped in with a wicket each.