Jofra Archer also bowled the fastest delivery of the tournament, which was clocked at 153.04kph. 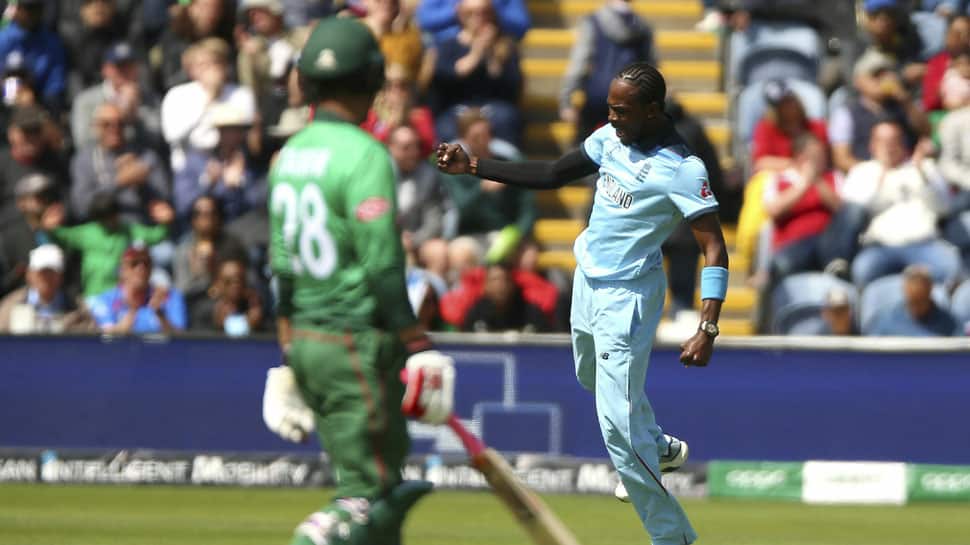 Young England fast bowler Jofra Archer is now a famous name and he is known for consistently bowling at a scorching pace and on Saturday Archer was in news again for his express pace. During England’s match against Bangladesh at Cardiff, Archer bowled a 143kph delivery to Bangladesh batsman Soumya Sarkar and the latter missed the ball completely which went on clip the bails and landed behind the boundary rope.

The speed with which ball covered the distance left everyone amused, including the commentators. It is to be noted that this has never happened in the past and that's why the commentators were also at a loss of words. Archer also bowled the fastest delivery of the tournament, which was clocked at 153.04kph.

It's not very often you see a fast bowler clean bowl a batsman with the ball then heading over the rope for a six? But when Jofra Archer bowls with electric pace, normal things don't happen pic.twitter.com/vMzim2cfwY

Earlier, England batsmen took Bangladesh bowlers for a toss with openers Jason Roy and Jonny Bairstow adding 128 runs for the first wicket. Bairstow was dismissed by Mashrafe Mortaza on 51 but Roy batted superbly to complete his ninth ODI century. Roy scored 153 runs off just 121 balls to help England post a massive 386/6 on the board. Wicketkeeper-batsman Jos Buttler also joined the party and added a quick 64 in 44 balls.

In response, Bangladesh lost Sarkar when the team's total was just 8 runs. Bangladesh all-rounder Shakib added 106 runs with Mushfiqur Rahim (44) but the two failed to maintain the required run-rate. Shakib batted with determination to take Bangladesh across the 200-mark in 37th over but once he departed in the 40th over, the match turned out to be nothing more than a formality for the hosts.

Cricket World Cup 2019, India vs Australia: Key player battles to watch out for