We did a very good job with the ball: Kemar Roach

West Indies started strong with Roach getting the wickets of Pujara and opener Mayank Agarwal while Shannon Gabriel dismissed Indian skipper Virat Kohli for cheap, all within the first 10 overs of the day. 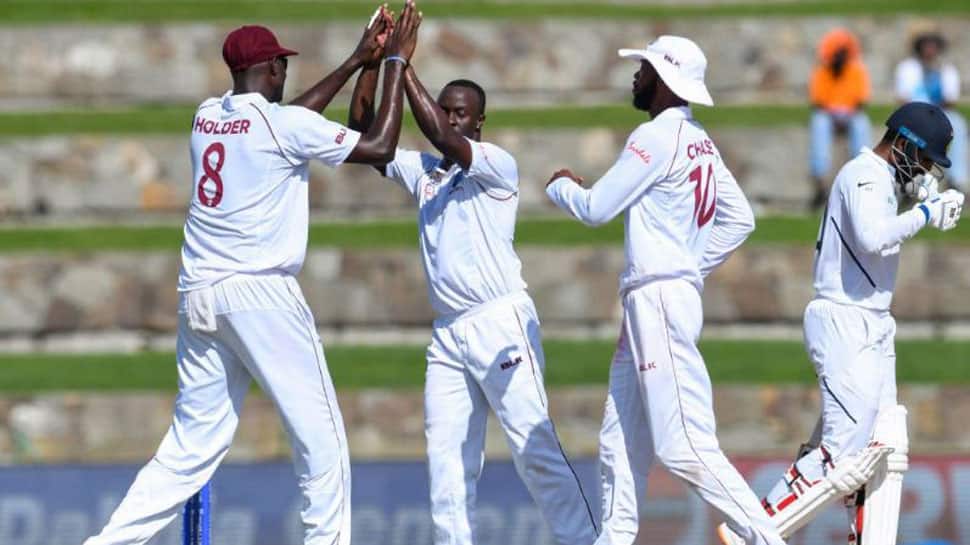 West Indies pacer Kemar Roach said his team used the conditions on offer well in North Sound on Day 1 of the first Test against India. Roach ended the day with figures of 3-34 and his wickets included those of India's Test stalwart Cheteshwar Pujara and the well set Hanuma Vihari.

West Indies started strong with Roach getting the wickets of Pujara and opener Mayank Agarwal while Shannon Gabriel dismissed Indian skipper Virat Kohli for cheap, all within the first 10 overs of the day.

"It was a normal Antigua pitch, where you would always get some moisture early on and help for the fast bowlers," Roach said.

"The ball came out pretty good today. It's a place I love to play, I've had some success here before so I'm happy with how things have gone so far."

Ajinkya Rahane then struck strong partnerships with KL Rahul and Vihari to rebuild the Indian innings. Roach said the pitch flattened out towards that part of the day.

"It (pitch) flattened out a bit quicker today than usual, so we had to be patient and build some pressure and challenge the batsmen," he said.

The hosts reaped dividends for their patient approach and got both Rahul and Vihari before they completed their half-centuries. Gabriel then denied Rahane a first Test century in over two years in the final stages of the day. The Indian vice-captain chopped on and had to walk having made 81 off 163 balls.

"It was a good day for us, we did a very good job with the ball. Having then 200 runs for six wickets down... I would take that," said Roach.

India will start Day 2 on 203/6 with wicketkeeper Rishabh Pant and Ravindra Jadeja in the middle. The last time the pair batted together was against Australia in January and the pair smashed 204 off 224 balls in a bruising attack on the Aussie bowlers.

Roach said the first session of Day 2 will hence be crucial for the West Indies as they look to not allow the Indians to run away with the game.

"The morning session is going to be very crucial for us, you don't want them to punish us and go too far ahead of us. I will try to sneak up the wickets and get their bowlers out there as early as possible and attack them as far as possible. I think (giving India) 50-60 runs tomorrow will be fantastic for us and let the batsmen go out there and get a good hit," he said.