At stumps, West Indies' score read 82/4 and the hosts are still trailing by 143 runs. Roston Chase and Jermaine Blackwood are still at the crease unbeaten on 21 and 10 respectively. 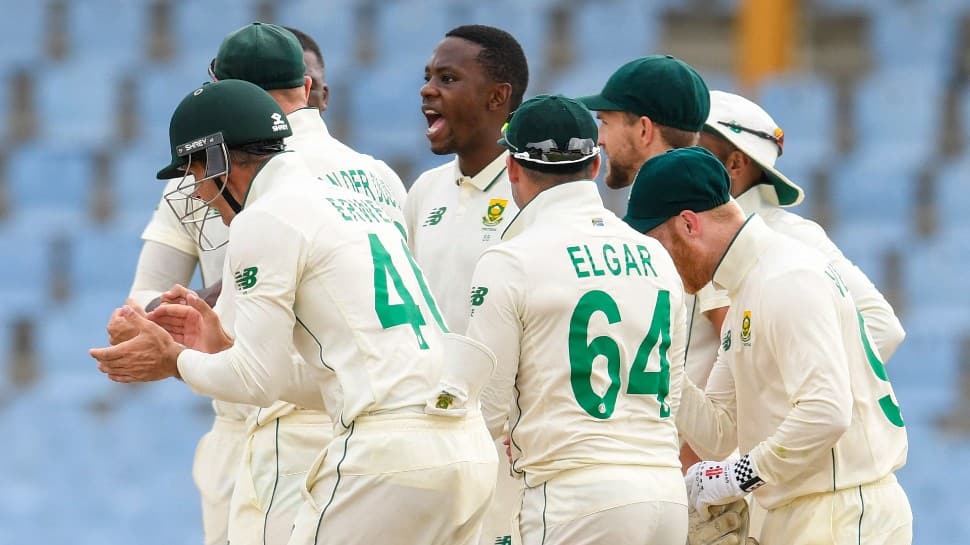 At stumps, West Indies' score read 82/4 and the hosts are still trailing by 143 runs. Roston Chase and Jermaine Blackwood are still at the crease unbeaten on 21 and 10 respectively.

Trailing by 225 runs, West Indies got off to a bad start as the hosts were restricted to 51/4 in the 18th over. Kraigg Brathwaite (7) and Kieran Powell (14) were sent back to the pavilion by Rabada while Shai Hope (12) and Kyle Mayers (12) were dismissed by Anrich Nortje. In the end, Chase and Blackwood took Windies to stumps, ensuring that the hosts still have six wickets in hand.

Rabada (2/18) and Nortje (2/34) reduced @windiescricket to 82/4 at stumps on Day 2 but the day belonged to Quinton de Kock who ended on an unbeaten 141 in the first innings. @windies cricket trail by 143 runs with 6 wickets in hand#WIvSA #ThatsOurGame pic.twitter.com/O1HzePnaMe

Earlier, resuming Day Two at 128/4, overnight batters Quinton de Kock and Rassie van der Dussen saw out the initial few overs and the duo added 34 more runs to the total. Finally, the partnership was broken by Jason Holder as he sent Dussen (46) back to the pavilion, reducing the Proteas to 162/5.

Wiaan Mulder joined de Kock in the middle and both batsmen ensured that the visitors do not lose any more wickets before the lunch break taking the score to 205/5 and as a result, South Africa extended their lead to 108 runs till the interval. After the tea break, Wiaan Mulder (25) was sent back to the pavilion by Holder and this ended the 53-run stand for the sixth wicket between Mulder and de Kock.

After this dismissal, Windies got two wickets in quick succession as Keshav Maharaj (0) and Kagiso Rabada (4) were sent back to the pavilion, reducing Proteas to 233/8 in the 83rd over. In the second session, de Kock brought up his century off just 148 balls and he helped the visitors extend their lead to over 200. In the second session, South Africa's innings ended on 322 and the Proteas managed to take a lead of 225 runs. For Windies, Holder scalped four wickets.