Shakib Al Hasan bagged a five-wicket haul to guide Bangladesh to a comfortable 62-run win over Afghanistan in a do-or-die clash of the 2019 International Cricket Council (ICC) World Cup at the Rose Bowl Cricket Stadium in Hampshire on Monday. 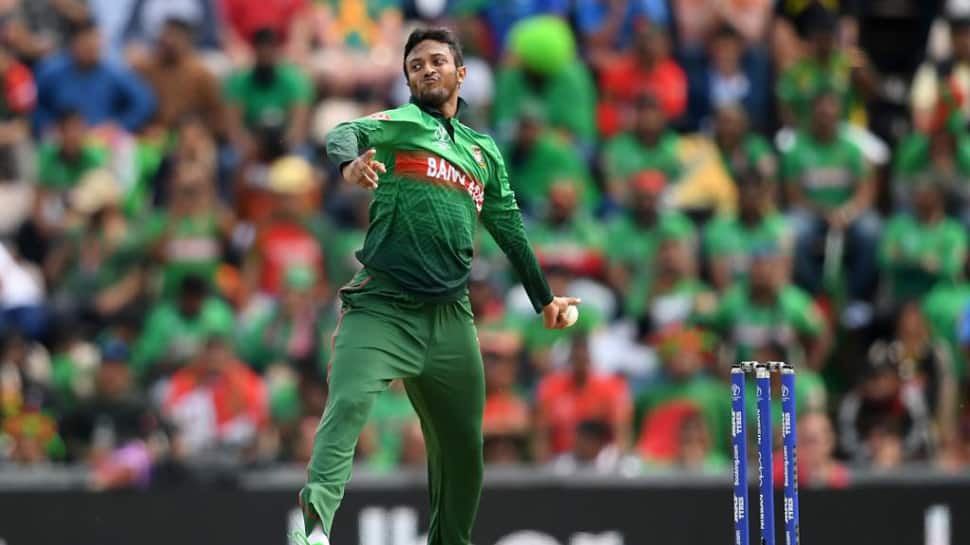 Shakib Al Hasan bagged a five-wicket haul to guide Bangladesh to a comfortable 62-run win over Afghanistan in a do-or-die clash of the 2019 International Cricket Council (ICC) World Cup at the Rose Bowl Cricket Stadium in Hampshire on Monday.

Defending a respectable total of 262 for eight, the 32-year-ol Bangladesh all-rounder proved to be a tomentor-in-chief for his side as he bagged a career-best figures of five for 29 to help his side bowl out Afghanistan for 200 in 47 overs.

Besides Shakib,Mustafizur Rahim took two wickets while Mohammad Saifuddin and Mosaddek Hossain contributed with a wicket a piece.

Samiullah Shinwari (unbeaten at 49) and captain Gulbadin Naib (47) were the highest contributors for Afghanistan.

Earlier, Mushfiqur Rahim smashed an87-ball 83 while Shakib (51) also contributed with a half-century to help Bangladesh set a decent target of 263 for Afghanistan after being asked to bat first. Mujeeb Ur Rahman was the most economical bowler for the Gulbadin-led side with his figures of three for 29.

Let us take a look at the highest run-scorers and wicket-takers after Afghanistan vs Bangladesh match:

Bangladesh all-rounder Shakib Al Hasan's 51-run knock during the clash against Afghanistan saw him reclaim the numero-uno spot in the list of players with highest runs in the 2019 ICC World Cup.

Shakib now has a total of 476 runs to his name, overtaking Australia's David Warner who is now standing at the second spot with 447 runs from six matches he has played so far.

England batsman Joe Root is standing at the third spot with 424 runs from six matches. Australian skipper Aaron Finch and New Zealand captain Kane Williamson round off the top five with 396 and 373 runs from six and five matches, respectively.

Meanwhile, Mushfiqur Rahim's 83-run knock during the match saw him climb up two places to the sixth spot. He has notched up a total of 327 runs from six matches.

Pakistan fast bowler Mohammad Amir continues to lead the list of highest wicket-takers in the ongoing quadrennial event with a total of 15 wickets from five matches.

England's Jofra Archer and Australia's Mitchell Starc also have same number of wickets in their tally but they are placed at the second and third spots, respectively after conceding 269 and 304 runs.

New Zealand pacer Lockie Ferguson is standing at the fourth spot with 14 wickets, followed by England's Mark Wood with 12 wickets from five matches.

Bangladesh all-rounder Shakib Al Hasan's figures of five for 29 saw him break into the top 10 in the list of highest wicket-takers to stand at the eight spot with 10 scalps from six matches.