Australian opener David Warner leads the run-scoring charts with 516 runs in eight innings, following his 16 against New Zealand on Saturday. 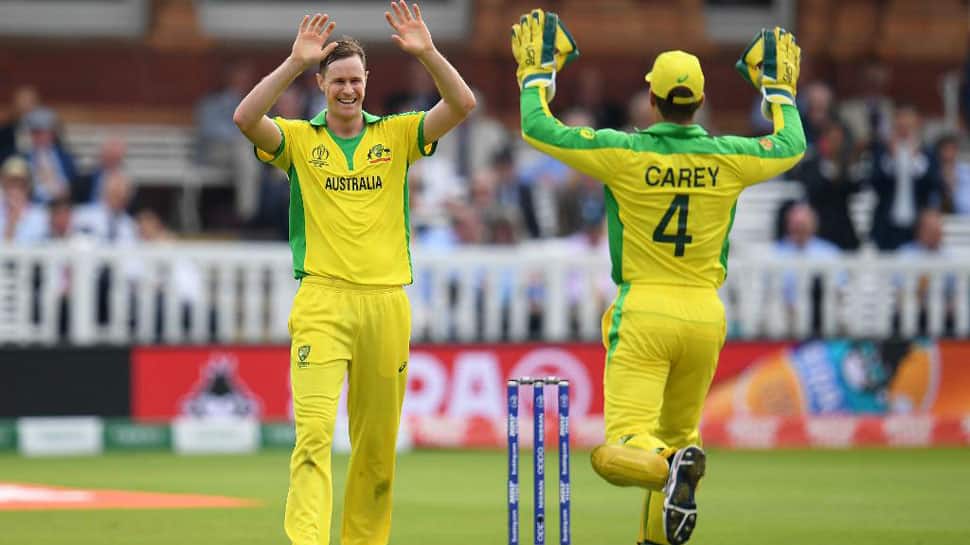 Team Australia skipper Aaron Finch won the toss and opted to bat first. However, this decision backfired early on as the Aussies were reduced to 92/5 in 21.3 overs following a fine performance by the New Zealand bowling attack led by Trent Boult.

Wicket-keeper batsman Alex Carey and Usman Khawaja made their presence felt at this stage with a partnership of 107 runs which helped Australia post a total of 243/9 in 50 overs. New Zealand pacer Trent Boult was the pick of the bowlers accounting for four wickets, becoming the first New Zealand based cricketer to pick a hat-trick in a World Cup clash.

Chasing the target, openers Henry Nicholls and Martin Guptill were dismissed for 8 and 20 runs respectively by Jason Behendroff who had picked a five-wicket haul against England in their previous match of the tournament.

It all went downhill from there on the Australian bowlers kept picking wickets at regular intervals, with New Zealand bundled out for 157 runs in 43.4 overs. Pacer Mitchell Starc recorded a five-wicket haul, with pacer Jason Behendroff the second highest wicket-taker for Australia with two wickets.

Let us take a look at the highest run-scorers and wicket-takers after New Zealand vs Australia match:

Australian opener David Warner leads the run-scoring charts with 516 runs in eight innings, following his 16 against New Zealand on Saturday. Fellow opener Aaron Finch (504) trails him by 12 runs on the second spot.

Australian pacer Mitchell Starc is placed on top of the list of the highest wicket-takers with 24 wickets in eight matches. New Zealand pacer Lockie Ferguson who accounted for the dismissals of Aaron Finch and Steve Smith on Saturday, finds himself on the second spot with 17 wickets in seven matches.

Pakistan pacer Mohammed Amir is placed on the third spot with 16 wickets. English pacer Jofra Archer and New Zealand fast bowler Trent Boult who picked a hat-trick against Australia on Saturday occupy the fourth and fifth positions on the table with 16 and 13 scalps respectively.