It usually falls on either the Chaitra month or in Vaisakha but down south in Kerala and Tami Nadu, it is celebrated in Dhanu, locally known as Margazhi. 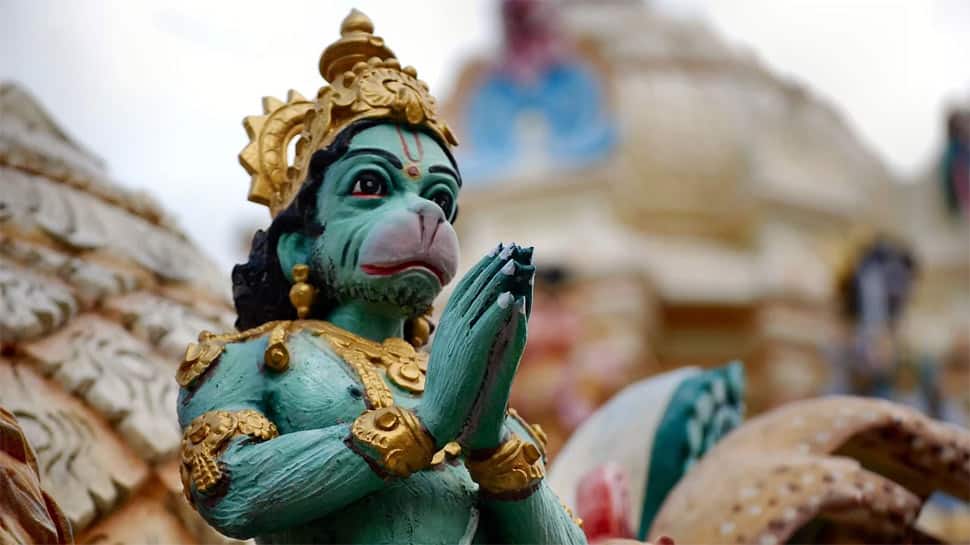 New Delhi: The auspicious occasion of Hanuman Jayanti falls this year on April 8. Also known by the name of Hanuman Janmotsav - it marks the birth of Lord Hanuman and celebrations begin days in advance. It usually falls on either the Chaitra month or in Vaisakha but down south in Kerala and Tami Nadu, it is celebrated in Dhanu, locally known as Margazhi.

Hanuman Jayanti is celebrated on different days in parts of India, depending upon various religious beliefs. However, the one which takes place during Chaitra Purnima is the most common one marked to commemorate Lord Hanuman's birthday.

On Hanuman Jayanti, devotees throng temples early morning and pray to Lord Hanuman for their well-being. They offer sindoor (vermillion), sweets, flowers, coconut to the Lord and in return get the same as prasad including Ganga Jal or Holy water of Ganges.

Devotees throng Hanuman and Lord Rama temples and pray to the good Lord for his blessings and seek protection. They recite Hanuman Chalisa, bhajans and mantras for pleasing the god.

Lord Hanuman symbolises power, strength and is an ardent Lord Rama follower. His devotion towards Rama is hailed and praised in various ancient scriptures like Ramayana.

Legends associated with the birth of Lord Hanuman:

There are various legends associated with the birth of Lord Hanuman, here are the most common ones:

According to Valmiki Ramayana, Apsara Anjana prayed to Lord Shiva and set out on an intense meditation for 12 long years to get a child. After being pleased with her devotion and intense prayer, Lord Shiva granted the son to Anjana and her husband Kesari, who was the son of Brahaspati.

Kesari was the king of Sumeru. Hanuman was the son which Lord Shiva granted to Anjana and Kesari. He was born on Anjaneri mountains.

However, as per other beliefs, Hanuman is believed to be the reincarnation of Lord Shiva.

Also, there is another set of legend which says Vayu—the wind god on Lord Shiva's instruction transferred his male energy to Anjana's womb, therefore, Hanuman is also known as pawan putra Hanuman (son of wind).

As per Vishnu Purana and Nardeya Purana, the birth of Hanuman, a Vanara, is linked to how once Narada cursed Vishnu for making him look like a Vanara—ape. Narada, who had sought Lord Vishnu's help to impress a princess felt humiliated a when the lord instead made him look like an ape (Narada wanted his face to look like that of the Lord) and the princess laughed at him.

After this, Narada cursed Lord Vishnu that one day he shall be dependant on a Vanara. The Lord told Narada, that he had made him look like a Vanara for his own good and made him realise that Hari in Sanskrit also means Vanara.

Hearing this Narada repented his curse but the Lord comforted him by saying that one day this curse shall act as a boon as it would lead to Lord Hanuman's birth (an avatar of Lord Shiva) who would help Lord Rama (an avatar of Lord Vishnu) in killing Ravana.

Mahavir Jayanti 2020: Here are some interesting facts about the festival