It is to be noted that at least 43 people were killed in the aftermath of the Sunday morning inferno at an unauthorised bag manufacturing factory in Delhi's Anaj Mandi area in Filmistan. 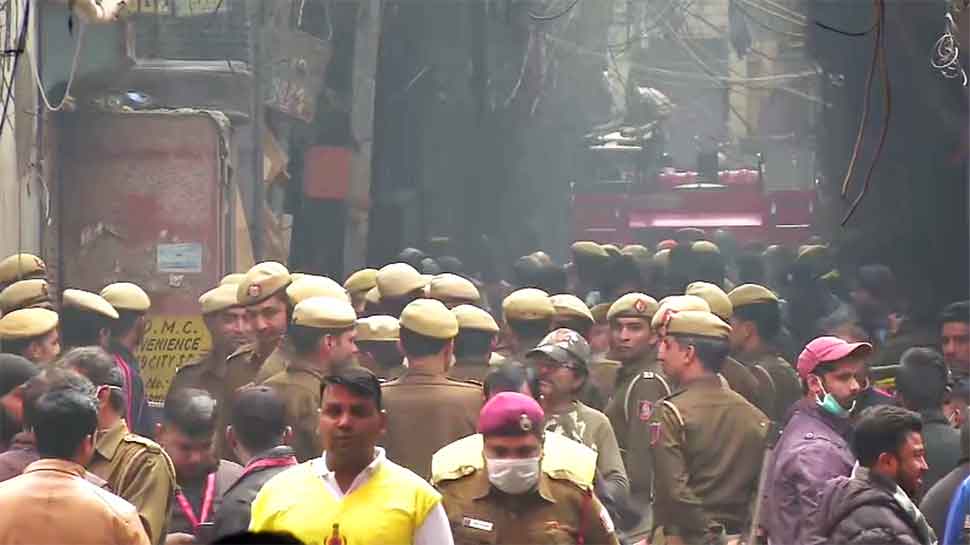 ANI Photo (Police personnel during the rescue operation after tragic fire in Delhi on Sunday)
Share:
Written By:

New Delhi: In a shocking development, a fire broke out once again on Monday morning in the same four-storey building in Delhi's Anaj Mandi area in Filmistan where a massive blaze had broken out on Sunday, claiming over three dozen lives and leaving several battling for it. At least four firetenders have been rushed to the spot to douse the flame.

Delhi: A fire has broken out in the same building in Anaj Mandi, Rani Jhansi Road where 43 people had died in a fire incident yesterday. Four fire tenders have been rushed to the spot. pic.twitter.com/f1heEaQ7dU

It is to be noted that at least 43 people were killed and many others are fighting for their lives in the aftermath of the Sunday morning inferno at an unauthorised bag manufacturing factory in Delhi's Anaj Mandi area in Filmistan.

On Sunday evening, the police arrested the building owner Rehan, along with his manager Furkan, and booked a case under Section 304 (punishment for culpable homicide not amounting to murder) of the Indian Penal Code.

Two brothers of Rehan - Imran and Shaan - were also questioned by the police since they own two-thirds of the property, police said.

It was Rehan, who manages the property, which was given on rent to around ten people who run various factories from the premises, police said. "It is a T-shaped building with one entry and exit facility. Over the years, Rehan purchased the houses behind this building. It is now a 600 sq m property in which the back gate exits are blocked due to illegal construction by other houses and factory owners," ANI quoted the official saying.

"Since the accident site is still very hot, forensic teams haven`t been able to collect samples properly. They will wait for a few more hours. To find out the electrical fault, electrical meters installed in the building will be checked," he added further.

Delhi factory fire: People in this Bihar village anxiously wait for a call from family members