The JNU administration had moved the high court on Tuesday seeking action against students for allegedly violating Delhi High Court's ruling which restrains them to protest within 100 meters of the admin block of university. 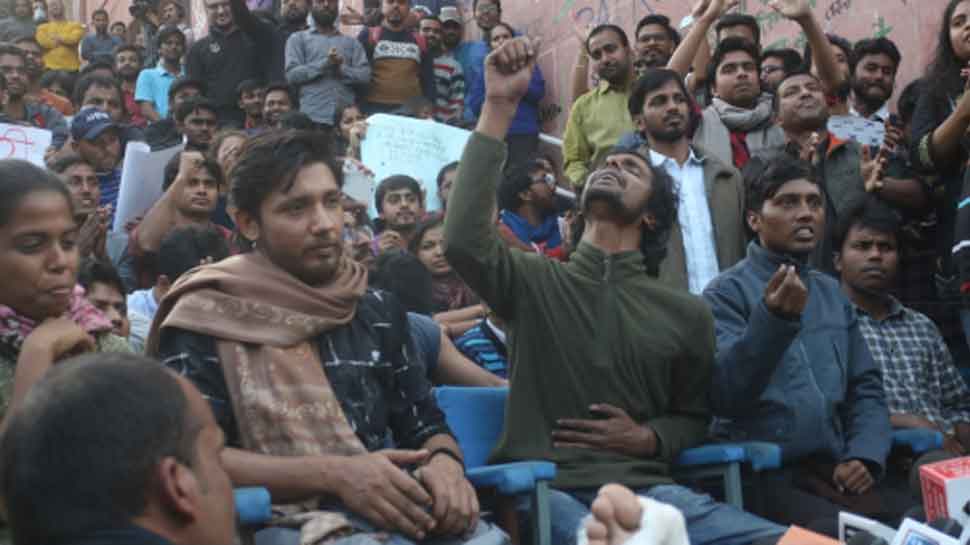 New Delhi:  A delegation of Jawaharlal Nehru University (JNU) students on Wednesday reached the Ministry of Human Resources Development (MHRD), which has appointed a high power committee for discussion with students and administration for peaceful resolution of all issues in the University.

The visually challenged students of the Jawaharlal Nehru University (JNU) will hold demonstrations against Delhi Police on Jantar Mantar against its brutal lathi-charge on students during their protests on Monday.

The JNU Visually Challenged Students' Forum has called for a ''demonstration against the brutal lathi-charge of Delhi Police'' and demanded justice for persons with disabilities.

''We urge people to gather in front of the Delhi Police Headquarter, Jaisingh Road, near Parliament Thana at 10:30 AM onwards to show their solidarity for the larger disability cause,'' it added.

According to reports, Delhi Police South West DCP is coordinating with the visually-impaired students' delegation coming to meet the Delhi Police chief. They will be brought on a bus to New Delhi. It is yet to be decided whether they will be allowed to assemble outside the new Delhi Police Head Office or stopped at the Jantar Mantar.

Meanwhile, the Delhi High Court is expected to take up on Wednesday a case filed by the Jawaharlal Nehru University (JNU) administration seeking contempt action against Delhi Police and its protesting students and several students' union leaders. The JNU administration had approached the high court on Tuesday seeking action against its students for allegedly violating a previous Delhi High Court ruling which restrains them to protest within 100 meters of the admin block of the university.

The complaint filed by JNU Registrar Pramod Kumar through university's standing counsel Monika sought the court's direction to issue a contempt notice against the JNUSU leaders. The plea states that due to the ongoing protests, the daily work of administration has been affected since October 28.

The university has also sought the court's direction to Delhi Police to provide assistance to the varsity for controlling acts of the students and remove them from 100 meters of the Administrative Block of the varsity in accordance with the previous order of the High Court.

Meanwhile, two FIRs were registered by the Delhi Police on Tuesday against the JNU students who clashed with the police during their protest march against the hostel fee hike on Monday.

Both the FIRs have been registered in two different police stations and against unidentified individuals.

Sharing more details, Delhi Police spokesman Anil Mittal said, "One FIR was registered in Kishangarh police station while the other in Lodhi Colony."

On Monday, as Parliament reconvened for the winter session, several JNU students clashed with the police after they were stopped from marching towards Parliament.

Delhi Police came out in full force to stop them from reaching Parliament, setting up barricades at several locations and closing down four Metro stations. However, the students managed to come close to the Parliament building.

Students also clashed with the police outside Safdarjung Tomb near Jor Bagh. The students alleged that they were lathi-charged by the police.

Many students and police personnel were injured in the clashes.