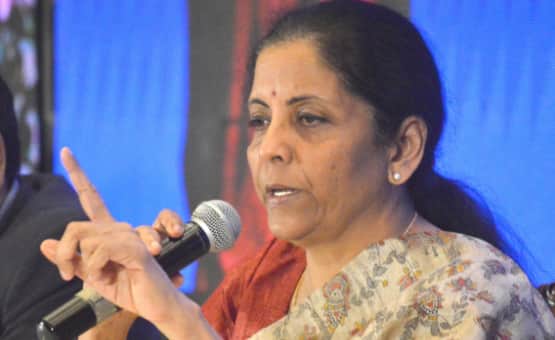 Bengaluru: Finance Minister Nirmala Sitharaman on Monday (February 17) defended the fiscal deficit figures in the union budget and termed it as "absolutely realistic". She said, "...We have given a realistic picture, we have been able to give a figure of 3.5 (fiscal deficit target) for the coming fiscal," while addressing a press conference.

In response to a question, Sitharaman said there has been a lot of curiosity about 'Vivad se Vishwas' scheme (announced in the budget to settle disputed cases between the Income Tax Department and taxpayers) and people were seeking more clarification on that and in a day or two the department of revenue will be able to give out the information.

On "people losing faith" in cooperative banks and recent RBI notice imposing restrictions on one such bank here, the FM said the government had shown concrete action in the latest budget by increasing the deposit insurance from Rs 1 lakh to Rs 5 lakh, adding "... (this) has not been done for decades... Also we have brought in a bill to amend banking regulation act to include cooperatives."

On Yes Bank allegedly facing stress, Sitharaman said, "Reserve Bank is the regulator of Banks..I'm not naming any particular bank, I'm sure Reserve Bank is playing its role as regulator- monitoring and taking care of banks."

On the recent Supreme Court order to telecom firm to pay their AGR arrears, Sitharaman said the Telecom Ministry would decide on the payment of adjusted gross revenue (AGR) arrears by the defaulting telcos.

She said, "The Telecom Ministry has been engaging with the telcos soon after the Supreme Court`s ruling on February 14. I will wait to hear the Ministry`s decision."

On the same day, the telecom department withdrew its letter that said no coercive action should be taken against them for not paying the dues in time.

The FM said, "The Telecom Ministry has been in touch with Airtel and Vodafone Idea since the apex court order. It will only be proper for me to hear from the Ministry on the verdict."

Notably, the finance Minister was on a day`s visit here to explain the fiscal 2020-21 Union Budget to the representatives of industry and trade, including startups entrepreneurs.