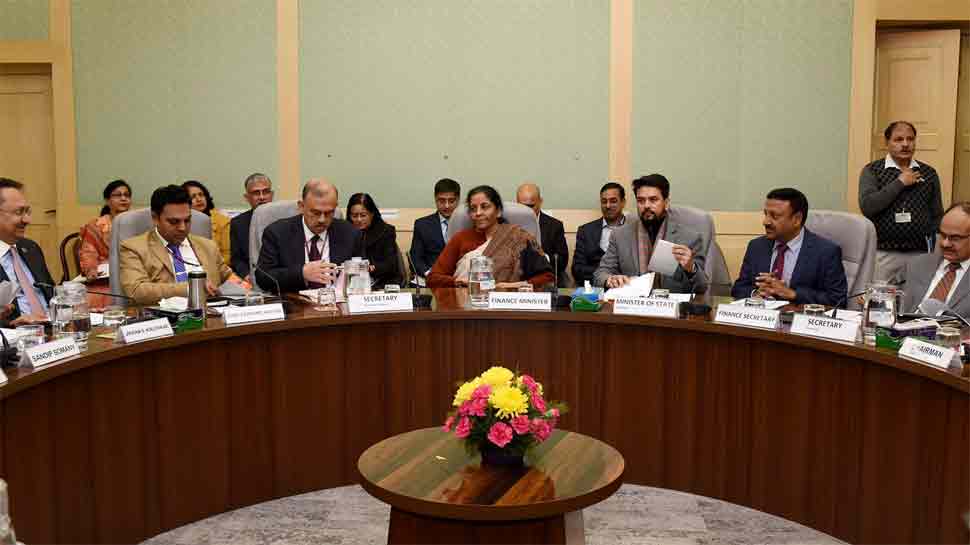 The main areas of discussion during the meeting included regulatory environment impacting private investment, measures for promotion of exports amid rising protectionist tendencies, Industrial production, logistics, Media and Entertainment services, IT and IT-enabled services among others, said a Ministry of Finance statement.

With a view to give boost to Indian economy, representatives of Industry, Services and Trade Sectors submitted several suggestions concerning Ease of doing business for going concern by reduction of compliance burden, reduction of tax litigation, allowing self-certification in low-risk industry, decriminalisation of Tax and Company Laws, reduction of cost of equity capital simplification and rationalisation with regards to duties and labour laws, adoption of international standards of Alternative, Dispute Resolution, Export Development funds for helping MSME exporters, ease of investment flow into manufacturing sector, said the FinMin statement.

Nirmala Sitharaman is likely to present her second Budget for the Modi government in the Lok Sabha on February 1. The main focus of the upcoming Budget will be on boosting economic growth, which slowed to an over six-year low of 4.5 per cent in the second quarter of 2019-20.

The Union Budget 2020-21 is likely to be a litmus test for the present government’s economic policies as it will be keenly watched by market watchers for numbers on key macroeconomic indicators. The pre-Budget consultations are expected to last till December 23.