The key sectors which would benefit from GST rate cuts are hotels, gems & jewellery, defence and automobiles. 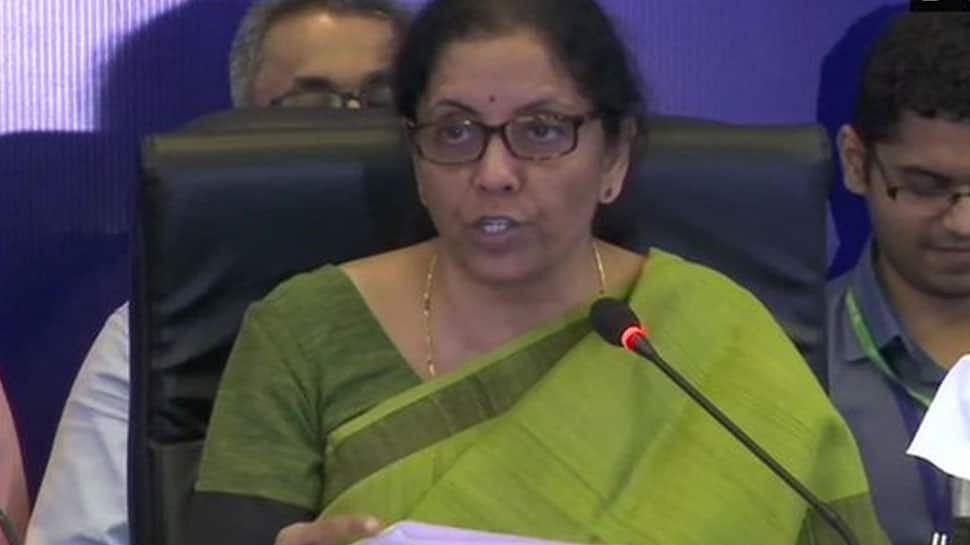 Goa: Hours after announcing major corporate tax cuts, Finance Minister Nirmala Sitharaman on Friday said that the Goods and Services Council (GST Council) has decided to further slash the tax rate on hotel tariffs. The GST Council also lowered tax on a number of goods and services to spur demand. The key sectors which would benefit from GST rate cuts are hotels, gems & jewellery, defence and automobiles.

Announcing the rate cuts following the GST Council meeting here, Finance Minister Nirmala Sitharaman said, ''Hotels room with tariff of Rs 7,500 crore would now attract 18 per cent GST from 28 per cent earlier. The hotel rooms costing between Rs 1,000 and Rs 7,500 would attract 12 per cent GST. However, no tax would be levied on hotel rooms with rental upto Rs 1,000.''

Among other rate changes, the GST Council has reduced rates for cups and plates made from leaves and hides to nil. The GST on caffeinated beverages has, however, been increased from 18 per cent to 28 per cent plus with an additional 12 per cent cess.

The announcement is likely to come as a big boost for the tourism sector.

''The GST rate on slide fasteners reduced from 18% to 12%, marine fuel 18% to 5%, 12% to 5% on wet grinders consisting of stone as a grinder, & 5% to nil on dried tamarind,'' Finance Minister Nirmala Sitharaman said after the meeting of 37th GST Council meeting in Goa.

Finance Minister Nirmala Sitharaman after meeting of 37th GST Council meeting in Goa: GST rate on slide fasteners has been reduced from 18% to 12%, marine fuel 18% to 5%, 12% to 5% on wet grinders consisting of stone as a grinder, & 5% to nil on dried tamarind. pic.twitter.com/RWzrhF8gYE

''Exemption from GST/IGST is being given on import of specified defence goods not being manufactured indigenously, it's being extended only up to 2024. Supply of goods & services to FIFA & other specified persons also exempted for U17 Women's World Cup in India,'' the FM said.

Among other major items, the GST Council has reduced compensation cess on passenger vehicles with a seating capacity of 10-13 persons by 1-3 per cent, thus making them cheaper. Railway wagons, coaches and rolling stocks would, however, now attract higher GST of 12 per cent from 5 per cent earlier.

In a major boost to gems and jewellery sector, the GST Council recommended to slashing GST on cut and polished semi-precious items to 0.25 per cent from 3 per cent now.

The revised GST rates would become effective from October 1, 2019.

Jaitley, as Finance Minister in the first Narendra Modi regime, was one of the key players in the roll-out of the new tax regime, which came into being in 2017 and formation of the GST Council.

To promote growth and investments in the country, Union Finance Minister Nirmala Sitharaman had on Friday morning announced to slash the corporate tax rates for domestic companies and stated that a new provision has been inserted in the Income Tax Act with effect from the fiscal year 2019-20.

"A new provision has been inserted in the Income Tax Act with effect from the fiscal year 2019-20, which allows any domestic company an option to pay income tax at the rate of 22 per cent subject to the condition that they will not avail any exemptions or incentive," she said.

She went on to highlight that "such companies shall not be required to pay any minimum alternative tax.

"Moreover, to attract investment in manufacturing, local companies incorporated after October 2019 will pay tax at 15 per cent, Sitharaman said.

Sitharaman stated that the corporate tax rate will be 22 per cent without exemptions, inclusive of surcharge and cess. "No Minimum Alternate Tax (MAT) applicable to such companies," she said.

Sitharaman's announcements and the GST council's meeting comes at a time when India's annual economic growth fell to a 25-quarter low of 5% in the April-June period.