Union Budget 2019 highlights live updates: Special additional excise duty of Re 1 per litre to be levied on petrol and diesel, says Nirmala Sitharaman

Union Budget 2019 is the maiden budget for Union Finance Minister Nirmala Sitharaman, who becomes the second woman finance minister to do so. She called on President Ram Nath Kovind at the Rashtrapati Bhavan before presenting her first Union Budget. 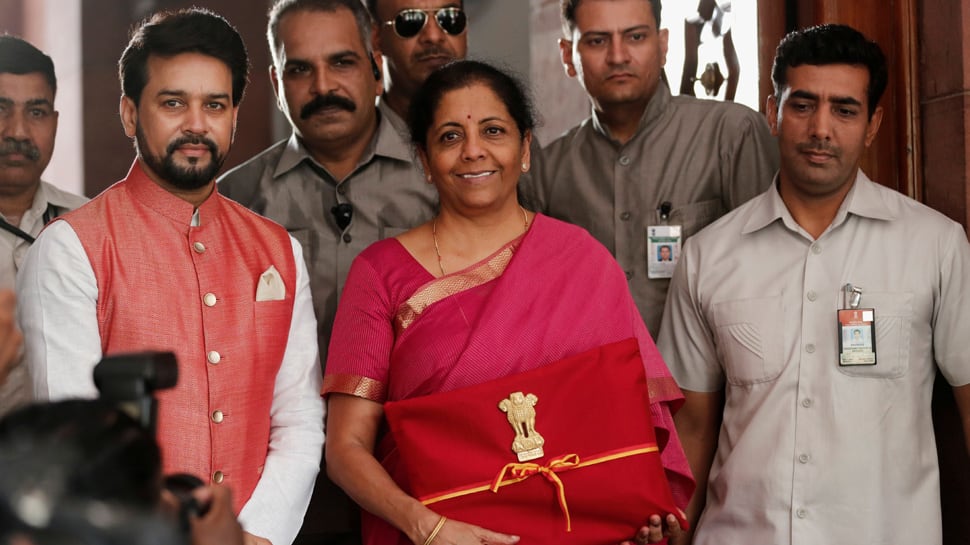 The Union Budget 2019-20 was presented by Union Finance Minister Nirmala Sitharaman on Friday in the Lok Sabha where she proposed to increase the special additional excise duty and road and infrastructure cess each one by Re 1 per litre on petrol and diesel. Sitharaman also proposed that to discourage the practice of making business payments in cash a TDS of two per cent on should be levied on cash withdrawal exceeding Re one crore in a year from a bank account.

To ease the burden on small and medium earners, she also proposed a slew of measures. "Those having an annual income up to Rs 5 lakhs are not required to pay any income tax. We are thankful to taxpayers who play an important role in nation building," she said,

Here are the highlights from the Union Budget 2019:

* Union Finance Minister Nirmala Sitharaman concluded her Budget speech saying, "In the first 50 years after independence we emphasized on rights; marking 75 years we should place emphasis on our duty towards India without undermining our rights."

* Income tax increases by three per cent for those earning between Rs 2-5 crore and 7% for those with income above Rs 5 crore: FM Nirmala Sitharaman

* TDS of two per cent on cash withdrawal exceeding Rs 1 crore in a year from a bank account to discourage cash transactions for business deals: FM Nirmala Sitharaman

* Government has already moved GST council to lower the GST rate on electric vehicles (EV) from 12% to 5%. Also to make EVs affordable for consumers our Govt will provide additional income tax deduction of 1.5 lakh rupees on the interest paid on the loans taken to purchase EVs: FM Nirmala Sitharaman

* 100 lakh crore rupees to be invested in infrastructure sector over next five years, Expert Committee to be set up to recommend structure and flow of funds through development finance institutions: FM Nirmala Sitharaman

* Every verified woman SHG (Self Help Group) member having a Jan Dhan account, an overdraft of 5000 rupees will be allowed: FM Nirmala Sitharaman

* NPAs of banks down by Rs 1 lakh crore in last one year. Rs 70000 crore for recapitalisation of PSU banks: FM Nirmala Sitharaman

* One woman in every SHG will be made eligible for loan upto 1 lakh under the Mudra scheme: FM Nirmala Sitharaman

* Issuance of Aadhaar card to NRI with Indian passport after the arrival in India without waiting for the mandatory 180 days: FM Nirmala Sitharaman

* Happy and satisfied to report that India will be made Open Defecation Free on October 2nd, 2019, as per the dream of PM Modi. To mark this occasion, Rashtriya Swachhata Kendra to be inaugurated at Raj Ghat, on 2nd October, 2019: FM Nirmala Sitharaman

* Budget 2019 proposes to establish a National Research Foundation to fund, to coordinate and to promote research in the country. NRF to be set up to strengthen overall research ecosystem in the country; funds available under all Ministries to be integrated with NRF: FM Nirmala Sitharaman

* Need to replicate Zero Budget Farming, to go back to basics, which will help doubling farmers income: FM Nirmala Sitharaman

* Government will bring a New Education Policy to bring education to the international level, focus on research and innovation. National Research Foundation will be formed to ensure the strengthening of the research ecosystem in the country, funds of all ministries will be merged for the foundation. Five years ago no Indian institution was in top 200 international educational institutions. Now there are three higher educational institutions in top 200: FM Nirmala Sitharaman

* Gandhipedia being developed by National Science Museum to sensitise the youth about Gandhian thoughts and philosophy: FM Nirmala Sitharaman

* In the second phase of PMAY-Gramin, 1.95 crore houses to be provided to eligible beneficiaries, during 2019-20 to 2021-22; they will have amenities such as LPG, electricity and toilets. Time for completion of houses under PMAY reduced from 314 days in 2015-16 to 114 days in 2017-18, enabling the scale of achievement in PMAY: FM Nirmala Sitharaman

* Annual Global Investors' Meet to be organized in India, using NIIF as the anchor to get key sets of global players to come and invest in India: FM Nirmala Sitharaman

* Government keeps Gaon, Garib and Kisan at the centre of everything we do, of every programme: FM Nirmala Sitharaman

* Interoperability of RBI depositories and SEBI depositories necessary for seamlesss transfer of treasury bills; govt. will take necessary measures in this regard in consultation with RBI and SEBI: FM Nirmala Sitharaman

* Pension benefit to be extended to around 3 crore retail traders and shopkeepers with an annual turnover less than 1.5 crores under Pradhan Mantri Karam Yogi Man Dhan Scheme: FM Nirmala Sitharaman

* Railway infra would need an investment of 50 lakh crores between 2018 and 2030; PPP to be used to unleash faster development and delivery of passenger freight services: FM Nirmala Sitharaman

* Schemes such as BharatMala, Sagarmala and UDAN are bridging rural urban divide and improving our transport infrastructure: FM Nirmala Sitharaman

* The people of India have validated their two goals for our country's future - national security and economic growth, says Nirmala Sitharaman during her Union Budget 2019-20 speech

This is Sitharaman's first budget in the second term of the Narendra Modi government. It will also be the maiden budget for Sitharaman, who becomes the second woman finance minister after Indira Gandhi to do so. Whenever a new government is elected, the Parliament convenes for the Budget Session and the newly sworn-in Finance Minister presents the Budget outlook for the first year till February 1. The 17th Lok Sabha`s first session started on June 17.

She called on President Ram Nath Kovind at the Rashtrapati Bhavan before presenting her first Union Budget. "As per tradition, Finance Minister Nirmala Sitharaman calls on President Ram Nath Kovind at Rashtrapati Bhavan before presenting the Union Budget," read a tweet posted from the official handle of President. She was joined by Minister of State (MoS) for Finance Anurag Thakur, Finance Secretary S C Garg, and Chief Economic Advisor Krishnamurthy Subramanian, among other officials.

Union Budget 2019: A look at the team behind Nirmala Sitharaman’s maiden budget