How artist Manav Gupta bonded with Kalam over nature

Fondly recalling his morning walks with former president A.P.J Abdul Kalam at the Mughal Gardens in Rashtrapati Bhavan, artist Manav Gupta, who was commissioned by Kalam to translate his poems into visuals, says the late scientist was a "true karmayogi" and "never gave up" working for the masses. 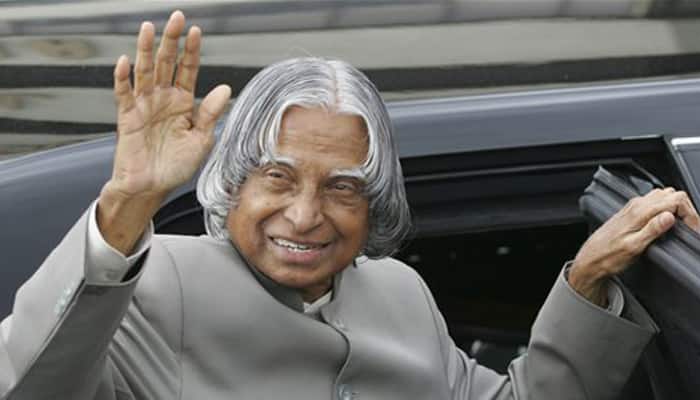 Kolkata: Fondly recalling his morning walks with former president A.P.J Abdul Kalam at the Mughal Gardens in Rashtrapati Bhavan, artist Manav Gupta, who was commissioned by Kalam to translate his poems into visuals, says the late scientist was a "true karmayogi" and "never gave up" working for the masses.

Gupta was commissioned by Kalam to interpret his poems into paintings that were shaped over four years. The collection was published by Penguin in "The Life Tree" in 2005 during his presidency.

"He was a true karmayogi. Never, never give up, that's the intense quality he had. He just never stopped working, he had such fervour for work, for writing, teaching, meeting children and contacting masses.

"He had this child-like quality, his death is an irreparable loss, it's a father-figure lost," Gupta told IANS over the phone from Delhi.

Kalam died on Monday evening in Shillong in Meghalaya.

Born and brought up in Kolkata, Gupta is a leading contemporary artist, known for his installations and mega murals as well as for promoting consciousness about environment through art, poetry and music.

Gupta said that during his engagement as the first artist-in-residence at the Rashtrapati Bhavan, he bonded well with Kalam over their love for nature.

"I was the first artist to do so (artist-in-residence). The fact that we bonded so much was because of our love for nature. Environmental consciousness is very close to my heart and for both of us learning from nature was a great connecting bond," Gupta said.

Gupta's collaboration or "jugalbandi" with Kalam started in 2002 when the scientist invited him to work on his poem "A National Prayer".

In fact, Kalam was so moved by the painting that he encouraged Gupta to interpret more of his writings.

"This engagement became a project which eventually became the book 'The Life Tree'. Over the years he gave me so much love, affection and respected my work, that itself was so satisfying," said Gupta.

Gupta was also privileged to have been invited with his family to stay in the family wing of Rashtrapati Bhavan during weekends.

The morning walks with Kalam in the iconic Mughal Gardens impacted Gupta, who went on to capture the beauty of the sprawling landscape in a series of paintings.

"He used to talk about art, music and nature. He was very inquisitive and there was a hunger for knowledge. What was remarkable was the preservation of innocence in his personality and deep-rooted Indian ethos," recollects Gupta.

Nature was a spontaneous inspiration for Kalam, said Gupta, who also created a painting based on the former president's poem borne from an appreciation of beauty of fallen jasmine flowers during one of their walks.

"This Eid I wished him and never imagined he would go away," said Gupta, whose daughter's first birthday celebration was in Kalam's presence.