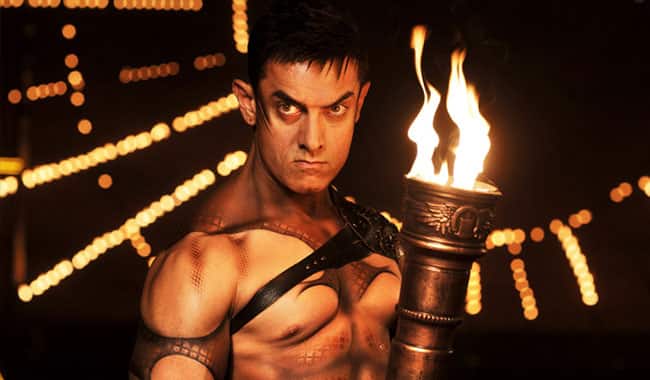 ‘Dhoom 3’ is one of the most anticipated sequels in the year 2013, and the reason is that for the first time Aamir Khan plays a negative lead. The director, Vijay Krishna Acharya makes it work in wonderful ways for the movie. It’s an Aamir fiesta all the way!

Iqbal (Jackie Shroff), a magician and modern circus owner, has a huge debt from a popular American bank, Western Chicago Bank, in the 1990s. After his only dream – ‘The Great Indian Circus’- is broken, Iqbal commits suicide. Aamir Khan, who plays his son Sahir, decides to avenge his father’s death by making sure that the bank closes down due to repeated robberies. What leaves the police perplexed is how the robber manages to escape every single time pulling off fantastic bike stunts and appearing out of nowhere. The only clue he leaves is a note in Hindi on the walls of the bank he has looted.

Then come, two cops (Jai and Ali) from India to solve this series of robberies in Chicago. To reveal any more would be to give away spoilers. All that can be added is, Sahir has some great tricks up his sleeve and the movie’s plot enthrals owing to these very twists.

The back story is well established by the writer and it delivers all the action and the speed that the ‘Dhoom’ franchise promises. The stunts on the bike and even in the circus scenes are very well made and shot. The technical team should also be lauded for seamless special effects. All the action sequences, especially the introduction scene and the climax are gripping and you wouldn’t even risk blinking, just in case you miss something. It must be pointed out that though the influence of the Hollywood is there in the movie, but the stunt direction looks original and keeps the Bollywood masala intact.

Acharya has made sure that the star power of Aamir is never underutilized and the superstar has given it all. His expressions and the shift in the character’s body language are intriguing and you realise why he is called a perfectionist. The sensitive and acting centric movies are Aamir’s main strength, but roles like this prove that he can be a tough competition to the other Khans if he comes round to doing more commercial cinema.

For instance the ‘Dhoom Tap’ dance sequence has been choreographed very well, and although Khan is not better than Hrithik, he has done a fairly good job with it. ‘Malang, touted to be the most expensive song sequence shot in Bollywood, has excellent acrobatics by both Katrina and Aamir.

Abhishek and Uday did not get as big an ear splitting welcome as Aamir, but they kept the audience happy during the most crucial parts of the movie – the chase sequences. The film slacks in the second half when Aamir-Katrina love sequence is being played out. But, it picks up speed again in the last 45 minutes or so. The writers have managed to space out all the twists and action throughout the movie even though it seems that the editing could have been tauter.

The movie has its flaws; there are times when you wish that the emotions could have been done away with. Uday Chopra and Katrina Kaif have little to do with the movie. Katrina looks stunning in every scene but the script offered her nothing more. Uday has his moments as the comic relief. The second half does tend to annoy a bit, and the only big dampener one might feel is that the movie runs a little too long - almost for 3 hours.

‘Dhoom 3’ manages to deliver a typically Bollywood revenge saga in a modern way. The suspense and the emotional quotient added to the speed and stunts make the movie as spectacular as it promises to be. Acharya brings to the audience an enthralling script and executes it equally well. The movie is sure to keep you hooked; go and watch it for Aamir!

`Cloudy With a Chance of Meatballs 2` review: A bland buffet