Islam a religion of peace, none of the 99 names of Allah stands for violence: PM Narendra Modi at World Sufi Forum

At the mega event of World Sufi Forum, Indian Prime Minister Narendra Modi inspired one and all with his gripping speech. 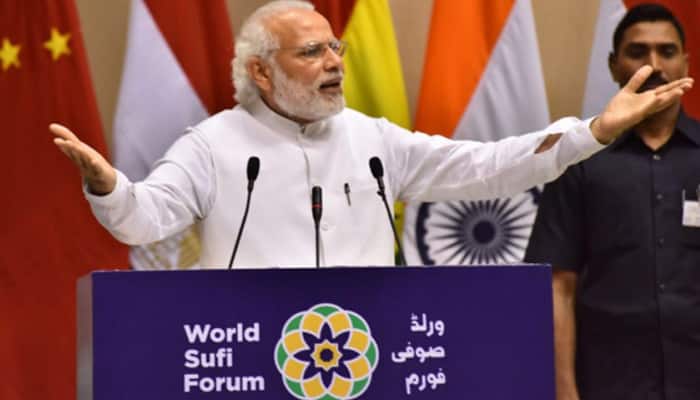 In his address at the World Sufi Forum here on Thursday, Modi noted that none of the 99 names of Allah stands for violence.

"Sufism is the voice of peace, co-existence, compassion, equality and a call to universal brotherhood.”

"When we think of 99 names of Allah, no one stands for force and violence. The first two names of Allah are compassionate and merciful. Allah is Rahman and Rahim. Sufism is the celebration of diversity and pluralism.”

"Sufis experience universal message of almighty that perfection in human life is reflected in qualities that are dear to God. For the Sufis, service to God meant service to humanity."

Asserting that there are terror groups that are instruments of state's policy and design, Prime Minister Narendra Modi today said terrorism uses diverse motivations and causes that cannot be justified.

Modi in an oblique reference to Pakistan said while some are trained in organised camps, there are others who "find their inspiration" in cyber space.

"There are forces and groups that are instruments of state policy and design. There are others recruited to the cause in misguided belief.”

"There are some who are trained in organised camps. There are those who find their inspiration in the borderless world of cyber space. Terrorism uses diverse motivations and causes, none of which can be justified.”

Asserting that terrorists "distort" a religion, he said they kill and destroy more in their own land and people than they do elsewhere while making the entire world "insecure and violent".

"Terrorists distort a religion whose cause they profess to support. They kill and destroy more in their own land and among their own people than they do elsewhere. And, they are putting entire regions to peril and making the world more insecure and violent," he said.

Noting that terrorism is not a confrontation against any religion, the Prime Minister said it is a battle that must be won through the strength of values and "real" message of religions.

"Those who spread terror in the name of religion are anti-religious. The fight against terrorism is not a confrontation against any religion. It cannot be. It is a struggle between the values of humanism and the forces of inhumanity.”

"It is not a conflict to be fought only through military, intelligence or diplomatic means. It is also a battle that must be won through the strength of our values and the real message of religions," he said.

Extolling the Sufis, he said: "At a time when the dark shadow of violence is becoming longer, you are the noor or the light of hope.”

"When young laughter is silenced by guns on the streets, you are the voice that heals."

Invoking Punjabi Sufi poet, humanist and philosopher Bulleh Shah, Modi said: "In wisdom of Bulleh Shah, the lord exists in every heart. His values are the need of our times. This is reality of nature. We learn this wisdom in perfect balance and harmony that exists in vast diversity of our forests."

He also stressed on Sufism`s "huge" contribution to poetry in India and "its profound impact" on the development of Indian music.

"You have come from different lands and cultures, but you are united by a common faith.”

“All are creation of God and that if we love God we must also love all his creations. This is an assembly of those whose lives itself is a message of peace, tolerance and love," said Modi.

"Welcome to a land that is a timeless fountain of peace and an ancient source of traditions and faiths. All our people, Hindus, Muslims, Sikhs, Christians, Jains, Buddhists, Parsis, believers, non-believers, are an integral part of India," he added.