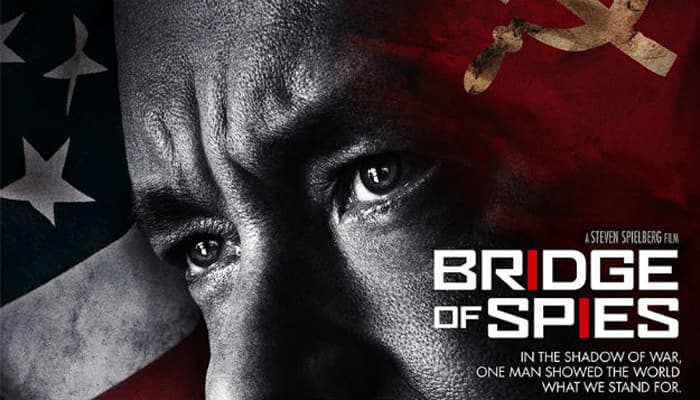 A tale spanning over a period of five years, from 1957 to 1962, "Bridge of Spies" is inspired by true events that occurred during the height of the cold war between the Union of Soviet Socialist Republics (USSR) and the US.

The film revolves around Jim Donovan (Tom Hanks), a persevering American lawyer who facilitated a smooth exchange of prisoners from the two blocks during this tense period.

The narration begins in a very artistic manner with an artist looking at the mirror while painting his portrait, thus giving us three visages of the same man in one frame. This is in Brooklyn, US. This quiet artist we later learn, on his arrest by agents from the FBI on charges of espionage, is retired Russian Colonel Rudolf Abel.

The CIA appoints a principled New York insurance attorney James Donovan to defend "the traitor and a high-level Soviet Spy", in the court of law.

While Abel is proved guilty in the court of law, Donovan being a thorough professional with abiding loyalty to the U.S. Constitution, cares and worries about his client's well being. He shrewdly saves the man from the electric chair.

Donovan's life gets complicated when he is asked to head to Berlin and facilitate the trade of Abel for Francis Gary Powers (Austin Stowell), the U-2 pilot being held by the Soviets as a spy after being shot down over Russian airspace.

Once in Berlin, Donovan learns about the confinement of an American student Frederic Pryor (Will Rogers), who had unfortunately, landed up on the wrong side of the Berlin Wall.

How he astutely negotiates the swap of both US citizens for the Russian, forms the crux of the tale.

The script written by Matt Charman and the Cohen brothers - Joel and Ethan - is ingeniously crafted as an intellectual thriller. The plot is gripping and the screenplay is near perfect. Tension is palpable in every scene, but the characters are almost never in real danger.

Every character is well etched and every actor has taken great pains to portray their roles naturally and effectively.

Hanks, who teams up with Spielberg for the fourth time, brings his adept everyman quality to the role of Donovan, sniffling his way through snow-blown Berlin trying to secure "a happy ending for everyone."

He is aptly supported by a constellation of terrific character actors. Alan Alda plays his business partner Thomas Watters, Amy Ryan portrays his wife Mary, Sebastian Koch is Wolfgang Vogel, the shrouded-in-mystery German mediator "although none of them have much to sink their teeth into".

But it is Mark Rylance who steals the show with his icy intensity as the plain faced and nondescript Rudolf Abel. He plays the good soldier who won't give the CIA anything about his covert work, with aplomb. His typical response, "Would it help?" elicits a chuckle or two every time he utters these words.

Spielberg has once again collaborated with his long time cinematographer, the two-time Oscar winner Janusz Kaminski, to give picture perfect images of the period. Kaminski captures the mood, locales and moments of history especially of East Germany and the iconic Glienicke Bridge with stark tones and atmospheric lighting.

The film has the classic Spielberg stamp imprinted all over.