Malala Yousafzai hopes to inspire change with her new documentary 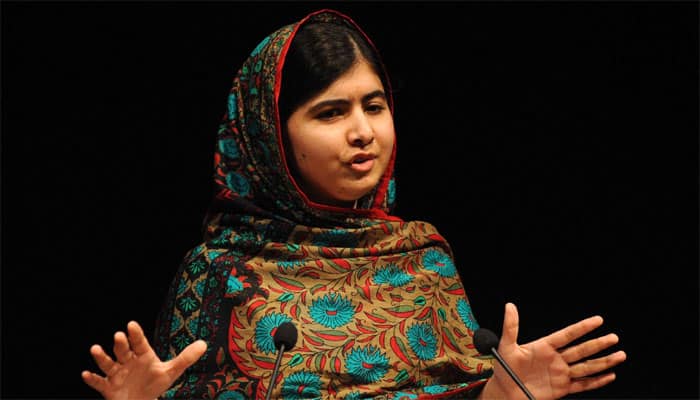 Most people know Pakistani Nobel Peace Prize winner Malala Yousafzai, who was shot by the Taliban in 2012 for demanding girls' right to education, but few have heard of the 19th century Afghan heroine she was named after.

According to Pashtun tradition, Malalai of Maiwand spurred her countrymen to victory against British troops in 1880, taking to the battlefield to rally a demoralized Afghan force with a verse about martyrdom. She was later struck down and killed.

The legend is recounted in "He Named Me Malala", a new documentary about Yousafzai, now 18, whose attack while riding a school bus shocked the world.

Malala and her father, Ziauddin Yousafzai, hit the red carpet in New York on Thursday (September 24) to celebrate the film's opening with director Davis Guggenheim.

The teen was happy to use all the attention to help spread her message of equality.

"It's wonderful because I have these young girls with me, girls from Nigeria, Pakistan, who want to have the right to education and they are standing up for it. So if their voice can be heard. This is the deal, this is what I want," she explained.

Filmed over 18 months, the intimate portrait shows a teenager more at ease on the world stage - speaking at U.N. headquarters in New York - or addressing students in Syrian refugee camps than with classmates in Britain where she was flown for surgery.

"In the beginning it was hard because I had no idea how it would work, but Davis has done it so beautifully. The animation he has done, the way he has delivered the story of my father and how he stood up to say in society that women do have a name, they do have an identity," said Malala Yousafzai.

"After watching the film it was so beautiful that it made me so happy that it can teach to many people and can inspire many people to come and join us," she added.

On Thursday, the Malala Fund launched Stand#withMalala "to advocate for free, safe, quality education for every girl, for 12 years of primary and secondary education."

While much is known about Yousafzai's advocacy work, the documentary lifts the lid on her family life in central England with much humor generated by her two brothers.

"Well, Davis was a bit kind, but not very much. My brothers say a lot against me. So you're going to see the rivalry between brothers and sisters through the film," she said with a smile.

"It was like a healing process when we shared our story with him. We healed up from our trauma as well. So it was a great experience with him to be honest."

Encouraged by her teacher father, Yousafzai began blogging for the BBC at the age of 11. Writing anonymously, she described life under the harsh edicts of the Taliban, bombed-out schools, executions under the cover of dark and girls' education limited to reading the Koran. She later made public appearances in Swat Valley, calling for girls' right to an education.

"I always said that once upon a time she was my daughter, but now I'm her father only, people know me as her father. And many parents write me that she is not only your daughter, she's our daughter as well. And I say, 'yes, of course, with no doubts.' So many people see themselves with her, human right's activists, and women's rights activists, children's rights activists. Many children have been named after her in Pakistan and Afghanistan. So it's a big thing and I'm thankful to God and feel proud."

Guggenheim, who also directed "An Inconvenient Truth" and "Waiting for 'Superman'," said the film will take audiences behind the headlines about Malala.

"You hear about the girl and the Nobel Peace Prize or the girl who was shot on her school bus. But the story is much more deep and much more rich. It's about a family and something very, very precious to them was taken away from them, their school. And the choice of a girl who said I'm going to speak out for what I believe and a father who let her."

Yousafzai's Malala Fund, which support girls' secondary education, wants the film to be shown in schools to inspire students to stand against bullying, racism and human rights violations.

The movie opens in theaters in the United States from Oct. 2 before it is released in Britain later in the month.