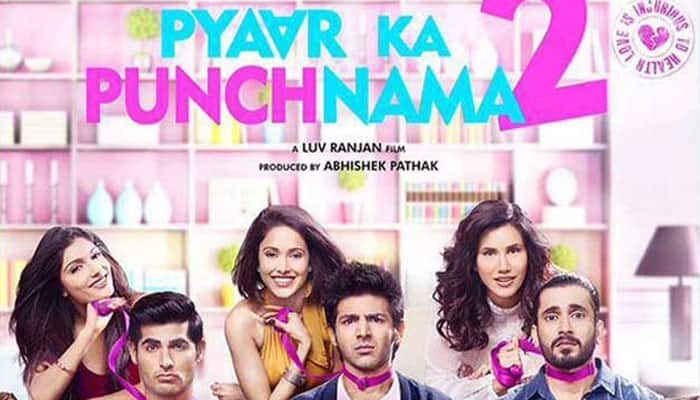 Luv Ranjan's first film, Pyaar Ka Punchnama, was a surprise commercial hit. Four years on, the director is back with a sequel built around a fresh set of wide-eyed characters navigating the complexities of love.

Pyaar Ka Punchnama 2 possesses neither the originality nor the punch that elevated the first film to several notches above the average.

It beats about the bush over its 136-minute running time in a bid to push the same old line of thinking that hinges on blaming the fairer sex for all soured relationships. The sequel repeats a few members of the original cast Kartik Aaryan, Nushrat Bharucha and Ishita Raj ? and adds some new actors to the mix. What it fails to do is lend genuine zing to the proceedings.

The three male protagonists of Pyaar Ka Punchnama 2 are successful Delhi-NCR professionals who share a swanky apartment with a balcony overlooking the city skyline.

They have everything they need to live it up but for love. But when they do find love, they run into trouble with, and because of, the girls they date.

Anshul (Kartik Aaryan) finds himself up against the shopaholic Chiku (Nushrat Bharucha), a girl surrounded by friends desperate to free her from her latest relationship. The result is complete mayhem.

Siddharth (Sunny Singh) falls in love with the staid and steady Supriya (Sonnalli Sehgall), who is unable to tell her orthodox parents that she is in love.

As a consequence, Sid is reduced to serving as her constant chauffeur and chaperone but without ever getting close to earning the status of a certified boyfriend.

Tarun (former child actor Omkar Kapoor) has to contend with a strong-willed BPO employee, Kusum (Ishita Raj), whose commitment to gender equality and a measured lifestyle borders on the obsessive.

While all this may seem like promising raw material for an effective romantic comedy, all that Pyaar Ka Punchnama 2 manages to be is an insipid and verbose drama that is neither funny nor particularly engaging.

It is all very well to light-heartedly highlight how the negative aspects of love can make life miserable for mamma's boys not endowed with the tact required to handle the demands of a steady relationship.

But it becomes too much of a stretch when a film would have us believe that it is only cussed and demanding girls who are at the root of all the trouble that love affairs cause. The primary problem with Pyaar Ka Punchnama is that the characters are hardly believable and the tight spots that they get into are conjured up through rather convoluted and laboured narrative methods.

As the boys jabber away incessantly and blame the whole world but themselves for their woes, they make very little sense.

On the acting front, too, the standards are rather low. Even the subtlest of emotions are sought to be conveyed via over-the-top means.

In the din that the film generates, love is given a bad name and sent to the gallows. And that isn't the ideal recipe for a film yearning for a generous shower of pyaar at the box office.

A swathe of great roles for women: Blanchett