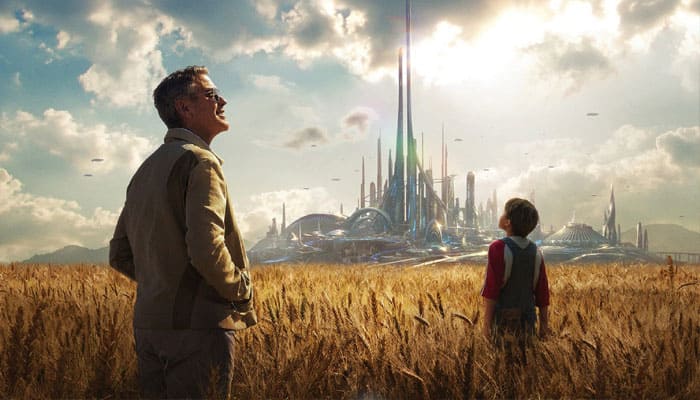 Disney's "Tomorrowland" is a typical sci-fi, blockbuster adventure film, a perfect offering for teenagers this summer.

Narrated in a non-linear, he-said, she-said manner, the film is initially confusing, but gradually settles down as the exposition gets clear.

The film begins with middle-aged George Clooney, as Frank Walker, telling us: "This is the story about the future and the future can be scary." He goes on to give reasons for his belief and then states: "When I was a kid, the future was different."

His version is then followed by Cassey's.

Frank's version starts way back in 1964 at the New York World Fair, where, as a teenage inventor, he enthusiastically goes to present his creation, a "jet pack". His creation is half-baked, but nevertheless he manages to impress Athena, a young girl, about his age, who offers him a shiny badge marked with the letter 'T'. This pin leads him to a futuristic place called Tomorrowland.

Over the years, Frank is exiled from Tomorrowland and he now leads a secluded life.

On the other hand, Cassey, an optimistic enthusiast, daughter of an ex-NASA scientist, is unwittingly introduced to Tomorrowland by Athena. Her quest to learn more about the place leads her to Frank and then their journey begins to save the world, doomed by wars and environmental disasters.

It is their story. Packed with life's lessons and fantasy effects that include soft-lens-clear images of a beautiful world, Tomorrowland is a dreamer's paradise. Some of the lessons of optimism are: "The tiniest of action can change the future" and how "In every moment there are possibilities of a better future".

George Clooney as the grumpy genius Frank Walker along with Hugh Laurie as the ruler of Tomorrowland offer nothing exceptional.

The only issue is that though the film ends on a very upbeat note, it does not offer any solutions to the issues it raised.