Roma were beaten 3-4 on aggregate after losing Thursday's second leg 1-3 in extra-time, the decisive goal coming from a penalty awarded after a VAR review three minutes from the end. 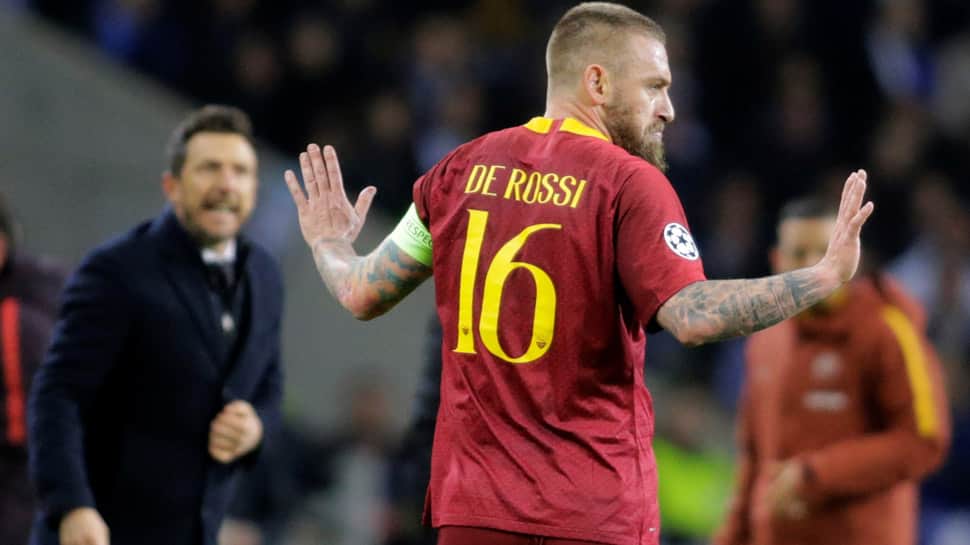 AS Roma's dramatic Champions League elimination by Porto, thanks to a late penalty awarded with a VAR review, was a 'terrible way to go out,' their captain Daniele De Rossi said on Thursday.

The grizzled, veteran midfielder added that he did not know what would happen to beleaguered coach Eusebio Di Francesco who headed straight for the team bus, without giving interviews after losing a match which Italian media said was decisive for his future at the club.

Roma, semi-finalists last year, were beaten 3-4 on aggregate after losing Thursday's second leg 1-3 in extra-time, the decisive goal coming from a penalty awarded after a VAR review three minutes from the end.

"It's a terrible way to go out, but the truth is we have to accept it. We are a team of highs and lows. It wasn't a perfect performance but we saw a united team with real men," he said.

"We were within touching distance of penalties and a chance of getting to the quarter-finals for a second year in a row," he added.

De Rossi said he did not want to enter into the talk about Di Francesco's future, "I hope we continue with him," he said.

"I don't know what will happen but nobody can take away from him what he has done. Tomorrow, we will work with him and then the club will decide," he added.

Forward Diego Perotti agreed that the team wanted Di Francesco to stay. "We've always given everything for him, it's a bad moment for all of us. We are all with him," he said.

Roma are fifth in the Serie A, but defeats against teams from the lower half of the table and a 0-3 derby loss to Lazio on Sunday have put Di Francesco under heavy pressure.

Porto coach Sergio Conceicao praised a 'sublime' performance by the Portuguese champions. "The players understood perfectly what we wanted. It was a sublime performance by all of them, they did a fantastic job," he said.

"It was proof of great maturity and calmness, which shows that this team is strong. They executed the game almost to perfection," he added.