Ali Mabkhout and  Khalfan Mubarak struck goals in the either side of the half-time to help UAE secure a crucial 2-0 win over India in the second Group A match of the AFC Asian Cup 2019 on Thursday. 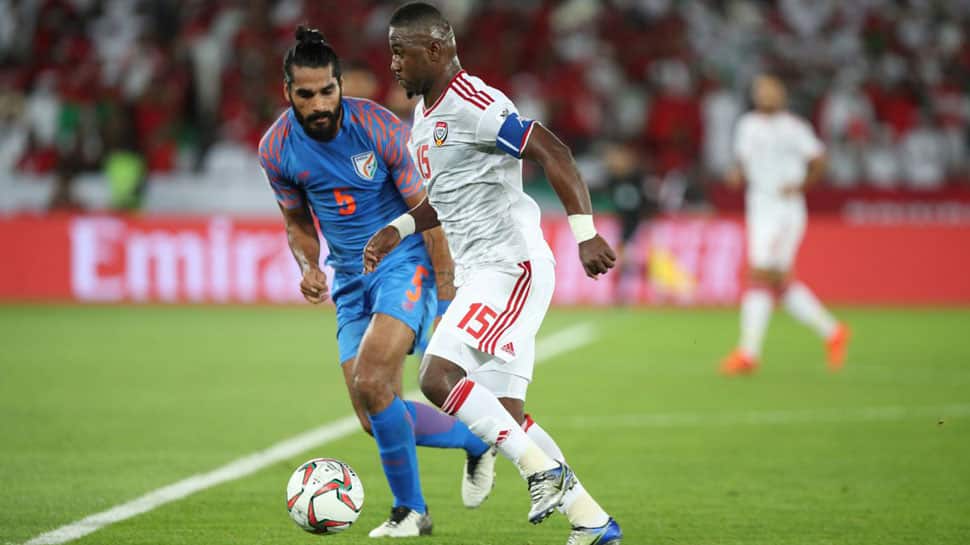 Ali Mabkhout and  Khalfan Mubarak struck goals in the either side of the half-time to help UAE secure a crucial 2-0 win over India in the second Group A match of the AFC Asian Cup 2019 at the Zayed Sports City Stadium in Abu Dhabhi on Thursday.

Despite India dominating the proceedings in the first-half, it was UAE who scored the goal when midfielder Khalfan Mubarak collected a long ball from Ali Ahmed Mabkhout and smashed it towards the net to put the hosts ahead in the 42nd minute.

Though India had two glorious chances to score in the first half, but they failed to convert any of them into goals. They also hit the crossbar twice in the second half, but UAE's Ali Mabkhout grabbed a high ball and put it past Indian keeper Gurpreet to dash India's hopes completely.

UAE, who played out a 1-1 draw against Bahrain in the opening match, have now gained three more points and climbed top of the group. India, on the other hand, are standing second with just three points.

The Sunil Chhetri-led side will now lock horns with Bahrain while hosts UAE will take on Thailand in their last group fixture on January 14.

FULL TIME! The referee blows the long whistle, bringing an end to the match. It's been a tough day for India, who had even hit the woodwork twice.

# GOAL!! India have dealt with a huge blow as UAE have doubled their lead with just a two minute left to the full time. Ali Mabkhout makes a superb finish as he chins a high ball and puts it past Gurpreet. The UAE player played a wonderful first touch to bring the ball down before making space past Pritam Kotal to double his side's lead. India 0-2 UAE (87 minutes)

87' Goal! Mabkhout is played through behind the defence with an aerial through ball, sells a dummie to Kotal, and puts it past Gurpreet to double the score for UAE.

# Substitution for India! Stephen Constantine make his final change as Jackichand Singh replaces Udanta.  UAE, on the other hand, have also made one change. Amer Abdulrahman coming in for Mohamed Ahmad. India 0-1 UAE (78 minutes)

# With less than 20 minutes left to the full time, India are pressing hard for the equalizer. While the hosts are dominating the procceedings, the Chhetri-led side are trying their best to keep up with their oppositions. Despite looking dangerous on counter attacks and notching up number of chances, India have been unlucky so far. India 0-1 UAE (72 minutes)

The #BlueTigers continue to press for the equalizer as we move into the final 20 minutes of the match. #INDUAE #BackTheBlue #IndianFootball #AsianDream

# Free kick for India! Chhetri  takes the free-kick and prepares himself for the same but shoots it off the target. India are showing good intent at the moment, but they are yet to level the score against the hosts. India 0-1 UAE (57 minutes)

57' Free-kick for India! @chetrisunil11 lines it up, but its just over the bar. The ball just did not dip in time.

# Jeje has almost levelled the score for India when he tried to lift an indirect free-kick from AnirudhThapa into the top corner, but eventually failed to hit the target. India 0-1 UAE (53 minutes)

53' CLOSE! Oh so close!!!! @AnirudhThapa's indirect free-kick is headed out, but it falls straight to @jejefanai, who chests it down and pulls the trigger on the half volley. But it goes inches off the post.

# Though India began the proceedings in the second half, UAE were the one to make a confident start . The hosts are already looking better than the first-half as they are trying their best to get behind the Indian defence. The Men in Blue, meanwhile, have already committed a few fouls, with the referee also having a word with skipper Sunil Chhetri. India 0-1 UAE (49 minutes)

# India have made a substitution. Jeje Lalpheklua replaces Halicharan Narzary.

After the first 45 minutes, India trail the hosts  by one goal. Come on #BlueTigers! #INDUAE #BackTheBlue #IndianFootball #AsianDream

# The clash is all set to resume shortly with the second half set to begin!

Khalfan Mubarak's goal is the only difference between the two sides at the break.#AsianCup2019 pic.twitter.com/iiwOMehn98

# Soon after UAE went 1-0 up, India got a great chance to equalize the score when  Chhetri tries to put across UAE's Khalid Eisa but misses a goal by a whisker on the far post. India 0-1 UAE (44 minutes)

# GOAL!! UAE make the breakthrough first. Midfielder Khalfan Mubarak  breaks down the right, collects a long ball from Ali Ahmed Mabkhout and curles it into the back of the net to put the hosts ahead before the half-time. India 0-1 UAE (42nd minute)

GOAL ! 41' Khalfan Mubarak scores what might be a crucial goal for his side in this competition!

# After being trouble for first 30 minutes, the hosts finally manage to get behind the Indian defence for the first time in the match. UAE have started gaining the confidence, with number 9 Mohammed Bandar also coming close to scoring a goal by hitting the side netting with a left-foot try. India 0-0 UAE (38 minutes)

# Off the field, the Indians are  winning the contest in the stands!

# CHANCE! The Men in Blue missed yet another golden chance to take the lead when Udanta Singh runs down the right and passes the ball to Anirudh Thapa, who then sends in a brilliant cross to Chhetri but his header was once again saved by the UAE keeper.  India 0-0 UAE (23 minutes)

# After starting the match on the backfoot, India have finally started dominating the proceedings and winning the midfield battles. The Men in Blue are working together to keep UAE out of the match.While the hosts' defence are struggling to pick up the Indian runners, the latter's attack consisting Udanta, Chhetri and Ashique have been doing pretty well. India 0-0 UAE (14 minutes)

# CHANCE! India have a big chance to score a goal when captain and talisman Sunil Chhetri played a good through ball to Ashique who smashes a good drive towards the goalpost, only to see UAE netminder Khalid Bilal make a brilliant one-hand save to deny their opponents the opportunity to take lead. India 0-0 UAE (12 minutes)

# India made a nervous start to the match while the hosts came out all guns firing to force the Sunil Chhetri-led side to defend deep. UAE have enjoyed majority of the possession in the first few minutes of the match, with India clearly being pegged back. India 0-0 UAE (10 minutes)

# After donning white in the opening match against Thailand, the Indian men are sporting blue jersey today. UAE, on the other hand, are wearing all whites in their second match of the tournament and they get the proceedings underway.

's national anthem is done, and we are all set for the game!#INDUAE #BackTheBlue #IndianFootball #AsianDream #BlueTigers

# The match is all set to get underway. It will be intresting to see who will get the upperhand today.

The game is underway in Abu Dhabi, a crucial game for both sides, who will get the upper hand tonight? #AsianCup2019 pic.twitter.com/SObJgAMZoG

# The two sides have walked down the pitch for the national anthem!

# Meanwhile, this is what India's coach Stephen Constantine has to say ahead of the match!

"We are not coming here for a draw. We are coming to win the game and our target is to qualify from the group stages. We had taken the first step against Thailand and now we have to take the next one": @StephenConstan #INDUAE #BackTheBlue #IndianFootball #AsianDream #BlueTigers

# Here are the lineups of the two sides!

Can the Indians repeat their phenomenal performance against the hosts of the #AsianCup2019? Less than one hour to find out. pic.twitter.com/KJ4WJZbmai

The Indian football team kicked off their AFC Asian Cup campaign in Dubai with a stunning 4-1 win over Thailand in the opening contest of the coveted tournament.

Thailand, despite being bolstered by the presence of key players such as Teerasil Dangda and Chanathip Songkrasin, were simply outplayed by Sunil Chhetri and Ashique Kuruniyan.

But India cannot sit on its laurels for long as they are up for a much tougher opponent in the form of UAE on Thursday.

Hosts UAE are sitting pretty at 18 places higher than India in the FIFA World Rankings. Their strength can be gauged from the fact that they have been a regular at the AFC Asian Cup tournament, while the Blue Tigers have reacjed to this stage only for the fourth time.

The two sides have played 13 times against each other and India have lost eight and registered only two wins. India and UAE last met in 2011 in a FIFA World Cup qualifying match and that match ended in a 2-2 draw.

For UAE, the AFC Asia Cup 2019 tournament has not started on a very positive note as the hosts managed to settle for a 1-1 draw against Bahrain.

Therefore, it would not be wrong to say that India will be more confident than UAE when both sides will take to the field on Thursday. Apart from Chhetri and  Kuruniyan, Jeje Lalpekhua, Udanta Singh and youngster Anirudh Thapa also looked in good touch in the opening match against Thailand.

Defenders Sandesh Jhingan and Anas Edathodika will have a very important role to play as UAE is known for playing attacking football and they boast of strikers like Ali Mabkhout and Khalil among their ranks.