Alexandre Lacazette`s double and a late third from Pierre-Emerick Aubameyang earned the hosts the advantage after Mouctar Diakhaby had given the Spanish side an early lead. 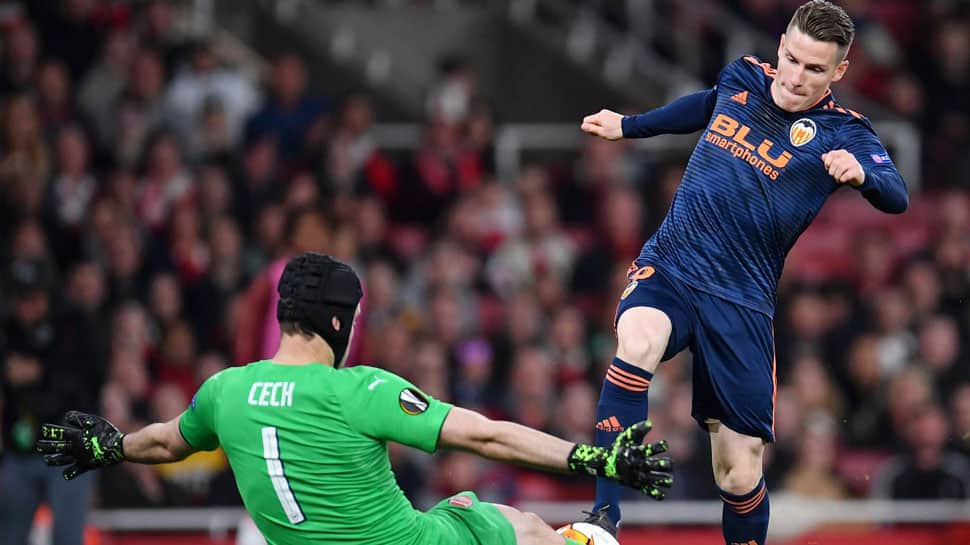 Arsenal may have beaten Valencia 3-1 in the first leg of their Europa League semi-final on Thursday but both managers believe the tie is still very much up for grabs.

Alexandre Lacazette`s double and a late third from Pierre-Emerick Aubameyang earned the hosts the advantage after Mouctar Diakhaby had given the Spanish side an early lead.

But Arsenal coach Unai Emery was notably cagey about his side`s chances of reaching this month`s final in Baku ahead of the second leg at Valencia`s Mestalla stadium next week.

"It`s a good result, but the second leg is going to be very difficult and maybe different. I consider it 50-50 in this one," the Spaniard told reporters. "They are going to feel strong with their supporters there."

"I don`t think any Valencia fan will think they were particularly stronger than us. We are excited and optimistic. If we have our fans behind us and get things right, we can win next week," he said.

Arsenal have been dogged by a string of poor displays away from The Emirates this season, and they have now conceded 10 goals in their last four games in all competitions.

Winning the Europa League looks like being the surest route to next season`s Champions League competition for both sides as they sit outside the qualifying spots in their domestic leagues.

Nevertheless, Emery said he was looking forward to returning to the Mestalla, having led Valencia to third-place finishes in La Liga behind Barcelona and Real Madrid for three consecutive seasons from 2010 to 2012.

"I want to enjoy playing there, with our players and our supporters. It`s going to be a tough atmosphere," he said.

"We are going to prepare for the match thinking to win, thinking to score, thinking to take our moment in attack, but it depends," he said with a shrug.

Marcelino seemed to feel that the scoreline on Thursday night flattered the home side somewhat.

"I don`t think Arsenal expected that result, but the game is played until the final whistle," he said.

"They have two very good strikers - I don`t know how many millions of euros they cost - and if you make the slightest mistake at this level, players like them can make you pay."

But the Spaniard suggested that his side still have everything to play for.

"The goal at the end was a surprise and makes it more difficult for us. But it doesn`t take anything away from our thought that we can still reach the final," he added.