Austria edge past North Macedonia to qualify for Euro 2020

It is a second successive qualification for Austria and will be only their third appearance at the finals, having also been co-hosts in 2008. 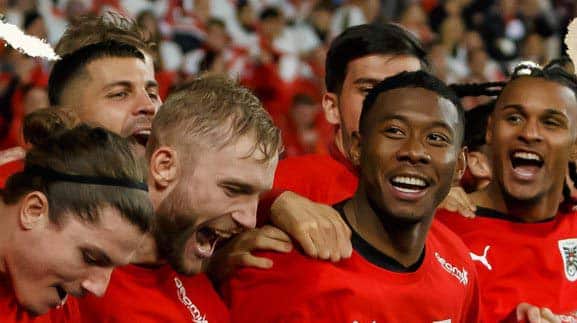 David Alaba’s early goal and a snap effort from Stefan Lainer in the second half ensured Austria qualified for next year’s European Championship with a 2-1 win over North Macedonia on Saturday.

It is a second successive qualification for Austria and will be only their third appearance at the finals, having also been co-hosts in 2008.

The victory kept Austria second in Group G, behind already qualified Poland, who won on Saturday in Israel, and left North Macedonia hoping for success in the playoffs to have any chance of also participating in the finals.

Austria got off to the perfect start to settle as Lainer played a cross-field through ball from deep in his own half, catching North Macedonia’s defence watching Marko Arnautovic in an offside position and not picking up a run from deep by Alaba.

As Arnautovic made no effort to go for the ball, Alaba came speeding onto it, rounding opposing goalkeeper Stole Dimitrievski to score with seven minutes played.

Arnautovic came close with three separate efforts and Dimitrievski made a dramatic save to deny Marcel Sabitzer before halftime.

Straight after the break the North Macedonia keeper made another acrobatic stop to tip over Valentino Lazaro’s close-range effort but when his attempt to punch away the resultant corner failed, Lainer snapped up the loose ball to double the lead in the 48th minute.

North Macedonia proved a handful for the home defence in the latter stages with substitute Vlatko Stojanovski having two good efforts in front of goal – the first narrowly wide and the second saved by Austria’s Alexander Schlager.

But 41,100 Austrian supporters began their celebrations early and seemed little bothered when Stojanovski scored a consolation with the last touch of the game.

Croatia qualify for Euro 2020 with 3-1 win over Slovakia