Leicester, who are battling relegation in the Premier League, have now won all three games since Ranieri was sacked and replaced by Shakespeare 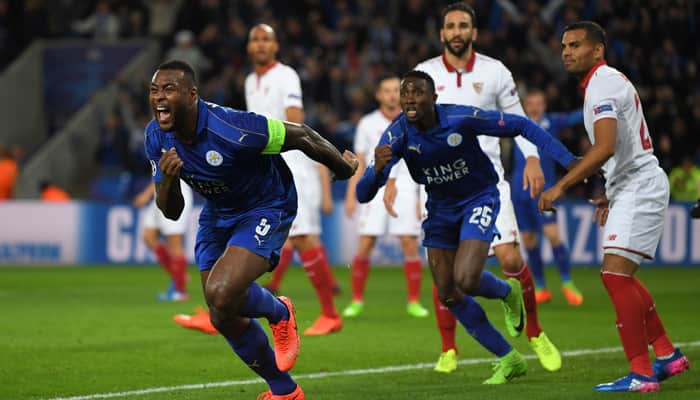 Leicester:Back from the depths of despair Leicester City once again scaled improbable heights with a tumultuous 2-0 victory over Spanish club Sevilla to reach the quarter-finals of the Champions League on Tuesday.

Sevilla missed a penalty and had Samir Nasri sent off as their hopes of a first ever quarter-final in the Champions League evaporated inside a rocking King Power Stadium.

Leicester, who are battling relegation in the Premier League, have now won all three games since Ranieri was sacked and replaced by Shakespeare.

Sevilla, who had not conceded an away goal in this season's competition, piled forward in the closing minutes but Champions League debutants Leicester held firm on a tumultuous night.

It looked ominous for Leicester in the early exchanges as Sevilla sought an away goal that would have put them in complete control of the tie.

Leicester keeper Schmeichel was forced into a great save to keep out Nasri's stinging shot after the former Manchester City player turned neatly in the box.

Sevilla struggled to find their passing rhythm though as Leicester worked tirelessly to press their opponents.

A well-organised Leicester looked increasingly dangerous from set pieces and it was from a Riyad Mahrez free kick that they took the lead with skipper Morgan bundling the ball into the Sevilla net with his thigh.

Ahead on away goals the situation played perfectly into Leicester's hands as they sat deep and broke quickly with Jamie Vardy always a threat on the counter-attack.

Sevilla began the second half with more purpose and came within a coat of paint of equalising in the 54th minute when Sergio Escudero's dipping effort from 30 metres beat Schmeichel but struck the underside of the crossbar.

It proved a pivotal moment as less than a minute later the ball dropped kindly for Marc Albrighton just inside the penalty area and he was allowed time and space to dispatch a left-foot shot past Sevilla keeper Sergio Rico.

Just when Sevilla were beginning to pin Leicester back in their own area Nasri needlessly got himself sent off after squaring up to Vardy with both players bumping foreheads.

Nasri received a second yellow card while Vardy, an irritation all night to Sevilla, was cautioned.

Sevilla were handed a lifeline almost immediately though when Schmeichel clattered into Vitolo and the referee awarded a penalty. N'Zonzi was handed the task of putting Sevilla back into the tie but his weak kick was saved by Schmeichel.