Champions League: Liverpool's patience pays off with 3-0 win over Maribor

The result leaves Juergen Klopp's side top of the group on eight points - one ahead of Sevilla and three clear of Spartak Moscow - and a win in Seville in the next game will secure their place in the last 16. 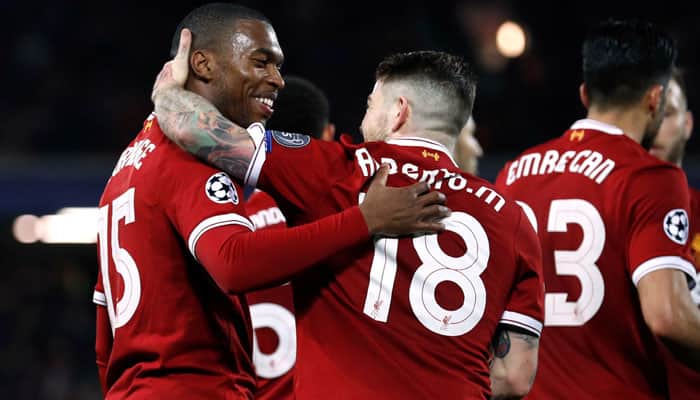 Liverpool: Liverpool were rewarded for their patience as they eventually overcame some resilient defending from Slovenia's Maribor to win 3-0 at Anfield in their Champions League Group E match on Wednesday.

The result leaves Juergen Klopp's side top of the group on eight points - one ahead of Sevilla and three clear of Spartak Moscow - and a win in Seville in the next game will secure their place in the last 16.

Maribor had learned their lesson after suffering an embarrassing 7-0 home defeat in Slovenia and defended in numbers, keeping a compact shape and allowing Liverpool plenty of possession but few chances.

Yet second-half goals from Mohamed Salah, Emre Can and substitute Daniel Sturridge wrapped up the win and ensured Liverpool did not pay a heavy price for James Milner's failure to score from the penalty spot.

Liverpool were without defender Dejan Lovren and Brazilian midfielder Philippe Coutinho, who were both ruled out with thigh injuries, and Klopp gave only a second start to former Arsenal midfielder Alex Oxlade-Chamberlain on the left of a front three.

Liverpool suffered a further injury blow when their Dutch central midfielder Georginio Wijnaldum pulled up with an ankle problem after 17 minutes to be replaced by captain Jordan Henderson.

Maribor keeper Jasmin Handanovic was well protected by his defenders, but had to produce a superb save on the half hour to tip a Roberto Firmino header on to the bar.

After a frustrating first half, Liverpool finally broke through in the 49th minute when Trent Alexander-Arnold's cross from the right was expertly flicked home by Salah, who leapt to meet the ball and turn it goalward from a tight angle.

The home side should have doubled their advantage four minutes later when Firmino turned superbly to beat his marker Aleksander Rajcevic, who then brought down the Brazilian inside the area to concede a penalty.

Yet Handanovic was up to the task again, guessing right and diving to push Milner's spot kick on to the post. It was Liverpool's fourth straight missed penalty at Anfield.

The cushion of a second goal arrived though in the 64th minute when Can upped the tempo, playing a swift one-two with Milner before confidently driving home from the edge of the box.

Substitute Sturridge made it 3-0 in the final minute when he was spotted, unmarked at the back post by Alberto Moreno following a short corner and had time to control before firing home.