Despite the brace against Newcastle in his second Manchester United debut, not everything went as per Cristiano Ronaldo's plan as social justice group reminded the world of the rape allegation levelled against the world class footballer. 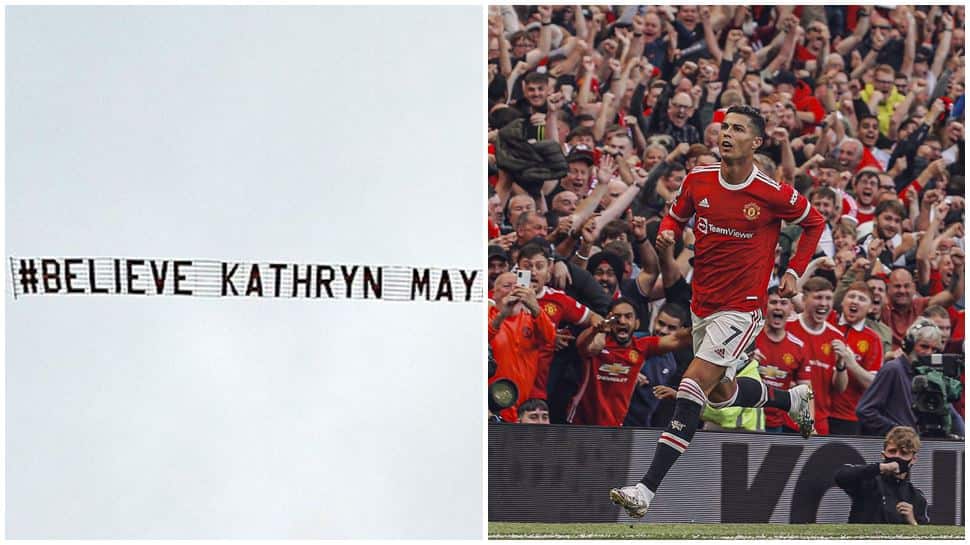 Banner flown over Old Trafford in support of woman who accused Cristiano Ronaldo of rape (Twitter)
Share:
Written By:

Cristiano Ronaldo surely made his presence felt in his second Manchester United debut at Old Trafford on Saturday as he completed a brace in his side's 4-1 win over Newcastle. However, not everything went as per Ronaldo's plan as Gender justice group Level Up reminded the world of the rape allegation levelled against the world class footballer.

The justice group flew a plane over Old Trafford with a banner tied on it, which read: "#Believe Kathryn Mayorga".

Kathryn Mayroga is the name of the woman, who had accused the footballer of rape, however, the case was soon dismissed and since initiated a civil suit against him.

"We flew a plane over the Man United football ground and our message is simple: Believe Kathryn Mayorga," Level Up wrote on Twitter.

"Let's say NO to the culture of silence around abuse from the football community. Pledge your solidarity with Kathryn & survivors."

We flew a plane over the Man United football ground and our message is simple: Believe Kathryn Mayorga.

Let’s say NO to the culture of silence around abuse from the football community. Pledge your solidarity with Kathryn & survivors: https://t.co/YZgcxou75E pic.twitter.com/jvGVOBYTIP

The incident dates back to 2009, when Mayorga stated that she was raped in a Las Vegas hotel room but refused to disclose any names at the point of time. It was reported that the victim then accepted money from Ronaldo's lawyers in the following year and was made to ink a non-disclosure agreement.

The incident was first brought to light by

Her case was first reported by German media agency Der Spiegel in 2017 and the victim was kept anonymous. However, soon after the reports emerged, Ronaldo's representatives termed the reports as "journalistic fiction", after which signed documents between both  the parties were made public.

A year later, Mayorga spoke about the incident publicly.

However, in 2019 the authorities declined the prosecution against Ronaldo, stating that the allegations "cannot be proven beyond a reasonable doubt."

It was then Mayorga decided to start a civil lawsuit against the 36-year-old, claiming that she was not mentally fit to sign the non-disclosure agreement.

In June 2021, it was reported that Ronaldo asked the lawsuit to be dismissed and demanded action against Mayorga's lawyer, Leslie Mark Stovall, for stealing documents from an entity called "Football Leaks" in 2018.

"This is not just about solidarity with Kathryn, it's about every single survivor of sexual violence. It's about breaking the silence around abuse, and speaking truth to power," a statement with the petition said.

"It's for everyone who knows what it feels like to live with lifelong injury, injustice and be told to stay quiet."

"This is about football clubs and players waking up to the reality that they can't act with impunity -- or pay their way out of accountability."