Pep Guardiola's side had won their previous eight games in all competitions, scoring 33 goals in the process. 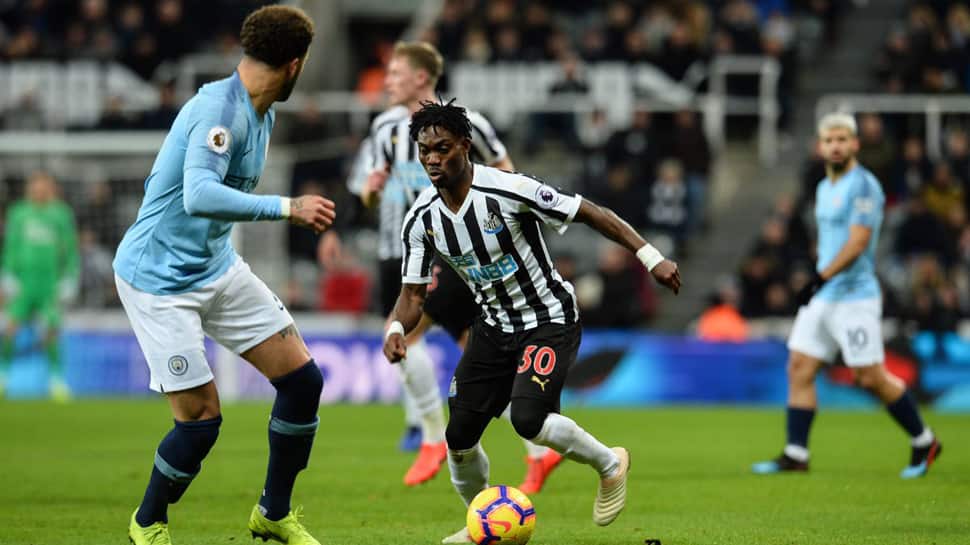 Reigning champions Manchester City took the lead after 24 seconds but suffered a shocking 1-2 defeat at the hands of Newcastle United on Tuesday as the Premier League title door swung wide open for leaders Liverpool.

City had won their previous eight games in all competitions, scoring 33 goals in the process, and looked on course to close the gap on Liverpool to one point when Sergio Aguero gave them the perfect start at St James` Park.

But Pep Guardiola`s side were nowhere near their fluent best and Salomon Rondon equalised after 66 minutes before Matt Ritchie`s late penalty secured victory for Newcastle.

Ole Gunnar Solskjaer got a reality check as his eight-game winning run in all competitions as Manchester United interim manager was ended by Burnley in a 2-2 draw at Old Trafford -- Victor Lindelof levelling for the hosts in stoppage time.

It was Cardiff`s first game since a light aircraft carrying Cardiff`s new signing Emiliano Sala went missing over the English Channel on Jan. 21.

The result left Cardiff third from bottom, two points ahead of Fulham who staged a remarkable comeback from 2-0 down to beat Brighton & Hove Albion 4-2 at Craven Cottage.

Bottom side Huddersfield Town look down and out after a 1-0 home defeat by Everton in Jan Siewert`s first game in charge left them 11 points adrift of the safety zone.

Manchester City have now dropped more points this season (16) than they did in the whole of last term.

After City`s sticky patch at the end of the year, which allowed Liverpool into pole position in the title race, they appeared to have Juergen Klopp`s side in their sights with a strong run of form but hit the buffers in the north east.

Liverpool can open a seven-point gap if they beat Leicester City at Anfield on Wednesday.

"We had a chance today to reduce the lead. Tomorrow is a game for our opponent. When you are behind you have to win games and we couldn`t do that," Guardiola said.

"But we are in January, there are a lot of games to play," he added.

Solskjaer`s dream run since becoming United`s interim manager following Jose Mourinho`s sacking looked like ending in defeat when they trailed 2-0 in the 87th minute after goals by Ashley Barnes and Chris Wood.

It was the first time United had gone behind under Solskjaer but they reacted well and Paul Pogba fired home a penalty before Lindelof scrambled home in the 92nd minute after Burnley keeper Tom Heaton had denied Alexis Sanchez with a great save.

While it was two points dropped in the race for a top-four finish, with United remaining sixth, but now two points behind Arsenal, Solskjaer drew comfort from his team`s reaction.

"The comeback was brilliant, the players have been asked about how they would react if they went 1-0 or 2-0 down so I felt the comeback was fantastic," he said.

Every Premier League game began with a "minute of reflection" for Cardiff`s Sala, but nowhere was the emotion stronger than in north London where, in ordinary circumstances, the 28-year-old striker would probably have made his debut.

Cardiff skipper Sol Bamba and Arsenal captain Mesut Ozil placed bunches of daffodils on the pitch before kickoff as a mark of respect while the matchday programme listed Sala with a yellow daffodil next to his name.

Away fans held up yellow signs to form a mosaic, matching the colours of Sala`s previous club Nantes.

"I know we`ve lost a game of football but there are more important things," Cardiff boss Neil Warnock said. "I am really proud of the players tonight."

In the `battle` for seventh place, Wolverhampton Wanderers beat West Ham United 3-0 at Molineux with goals in the second-half from Romain Saiss and a Raul Jimenez double.