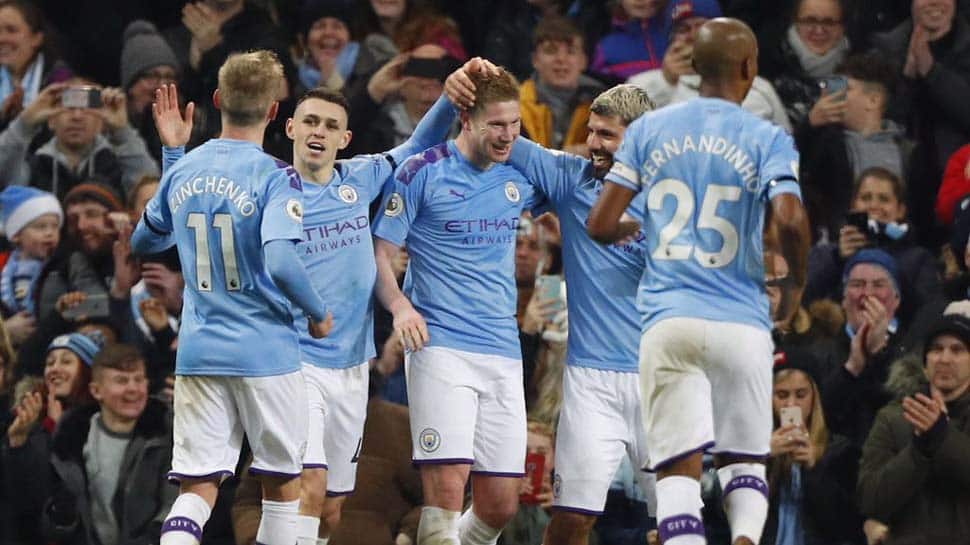 The Argentine striker struck City`s third, fifth and sixth goals at Villa Park to take his league tally to 177, two more than Frenchman Thierry Henry managed for Arsenal and fourth on the all-time list alongside Frank Lampard.

City`s resounding victory, in which Riyad Mahrez also scored twice and Gabriel Jesus once, meant they moved above Leicester City and trimmed Liverpool`s lead to 14 points, although Liverpool have played a game less.

Mahrez`s dribble and shot opened the scoring in the 18th minute and the Algerian struck again six minutes later.

Champions City`s slick football was too much for Villa who had dropped into the relegation zone before kickoff after Watford`s win at Bournemouth.

Aguero`s fierce strike from outside the area made it 3-0 in the 28th minute before Jesus tapped in a fourth on the stroke of halftime after a stunning pass by Kevin De Bruyne.

A razor-sharp Aguero moved clear of Henry with a neat finish in the 58th minute and continued to torment a sorry home side by completing his 12th Premier League hat-trick in the 81st minute.

Villa, who have fallen to third from bottom, did not manage a shot on target until they were awarded a stoppage-time penalty that was tucked away by Anwar El Ghazi.